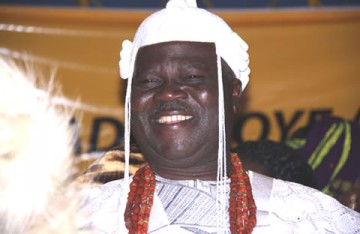 The age-long rivalries among the quarters in Akure, the Ondo State capital, turned violent Tuesday when

It was a violent Tuesday in Akure, the Ondo State capital when youths of Isolo engaged those of Akure in a free-for-all over the directive that all shops and markets within the town should be closed following the death of the paramount ruler of the town, Oba Adebiyi Adesida Afunbiowo II.

At least 10 persons were said to have been injured during the clash among youths of the two rival quarters.

As the death of the Akure monarch was announced on Sunday in line with the tradition of the town, all shops and markets were ordered to be closed for seven days in order to mourn the late monarch.

Determined to enforce the order, youths from Akure quarters moved from one part of the town to the other threatening to deal with any person that violated the directive.

Crisis broke out when the youths got to areas that fell under Isolo quarters in order to enforce the directive.

However, the age-long rivalries among the three traditional rulers – the Iralepo of Isikan, Oba Olu Ojo; the Osolo of Isolo, Oba Olukayode Oluwatuyi; and the Deji of Akure, Oba Adebiyi Adesida, which had resulted in several litigations, reared its ugly head again.

While the Deji had claimed that all other areas are quarters under Akure, where he is a paramount ruler, the two other obas had resisted, preferring to be autonomous and independent of each other.

Not satisfied with the judgment of the Court of Appeal which said that the two other obas should stop parading themselves as traditional rulers, the two monarchs had approached the Supreme Court.

This was the situation before the Osolo of Isolo joined his ancestors about three months ago while the Deji of Akure died last Sunday during a brief illness.

Accordingly, the Regent of Isolo, Adebusola Oluwatuyi was said to have directed youths of the area to resist the extension of the order of the Deji in Council for the closure of businesses within the area.

The regent was also said to have rejected the directive that the palace of Osolo be closed for seven days in order to mourn the late Deji.

Fight however broke out yesterday when the youths of Isolo were trying to repel the youths of Akure from further enforcing the order to close the Osolo palace and ensure that no shop was opened until after the seven days of mourning.

The Isolo youths were said to be acting in line with the instruction of their regent who announced that shops in areas located within her domain should be open for business.

The Akure youths took the enforcement parade to Isikan, but the youths of Isikan made no attempt to resist them, as they were said to have been calmed by elders of the area.

Confirming the incident, Police Public Relations Officer for the Ondo State Command, Mr. Wole Ogodo, said the police moved in swiftly when the call came in on the matter.

Ogodo, who said nobody was injured, added that the command was on top of the situation. He insisted that normalcy had returned to the areas and no arrests were made.