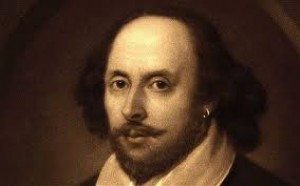 Like Precalculus and Newton’s laws, Shakespeare’s plays are among the most groaned-about high school topics, begetting the complaint: “When will I ever need to know about this in real life?” Turns out, pretty often. Shakespeare can be credited for the invention of thousands of words that are now an everyday part of the English language (including, but not limited to, “eyeball,” “fashionable,” and “manager.”)

In addition to his being a particularly clever wordsmith, Shakespeare’s word invention can be credited to the fact that the English language as a whole was in a major state of flux during the time that he was writing. Colonization and wars meant that English speakers were borrowing more and more words from other languages.

It’s hard to say whether or not Shakespeare was the first to use many of these words, but in most cases he has long been believed to be the first to write them (although the widespread digitization of books has lead to a few interesting discoveries from earlier sources.)

So before you dismiss Shakespeare as a stodgy, boring alternative to more contemporary writers, remember that you have him to thank for the popularization following words…and around 1,700 in total!

Gloomy
Definition: Somewhat dark: not bright or sunny
Origin: “To gloom” was a verb that existed before Shakespeare converted the word into an adjective in a number of his plays.
Quote: “Forced in the ruthless, vast, and gloomy woods?” – Titus Andronicus

Laughable
Definition: Bad in a way that seems foolish or silly
Origin: Derived from the verb “laugh.”
Quote: “Though Nestor swear the jest be laughable.” – The Merchant of Venice

Majestic
Definition: Large and impressively beautiful
Origin: From “majesty,” which appeared in the 1300s, meaning “greatness.” “Majestical” was first used in the 1570s.
Quote: “This is a most majestic vision” – The Tempest

Lonely
Definition: Sad from being apart from other people
Origin: “Alone” was first shortened to “lone” in the 1400s.
Quote: “Believe’t not lightly – though I go alone / Like to a lonely dragon that his fen –Coriolanus

Radiance
Definition: A quality of brightness and happiness that can be seen on a person’s face
Origin: Derived from the Latin “radiantem,” meaning “beaming.”
Quote: “For by the sacred radiance of the sun” – King Lear

Generous
Definition: Freely giving or sharing money and other valuable things
Origin: From the Latin “generosus,” meaning “of noble birth.”
Quote: “Free me so far in your most generous thoughts / That I have shot mine arrow o’er the house / And hurt my brother.” – Hamlet

Frugal
Definition:Careful about spending money or using things when you do not need to
Origin: From the Latin “frugi,” meaning “useful, proper, worthy, honest.”
Quote: “Chid I for that at frugal Nature’s frame?” – Much Ado About Nothing

Critical
Definition: Expressing criticism or disapproval
Origin: From the Latin “criticus,” which referred specifically to a literary critic.
Quote: “For I am nothing if not critical” – Othello

Courtship
Definition: The activities that occur when people are developing a romantic relationship that could lead to marriage or the period of time when such activities occur
Origin: “Court” was first used to mean “woo” in the 1570s; prior, it was used to mean “king’s court, princely residence,” derived from the French “cort.”
Quote: “To courtship and such fair ostents of love” – The Merchant of Venice

Zany
Definition: Amusingly unconventional and idiosyncratic
Origin: Derived from the Italian “zani,” which came from “Zanni,” a version of the name “Giovanni.”
Quote: “Some carry-tale, some please-man, some slight zany” – Love’s Labour’s Lost

Undress
Definition: To take your clothes off
Origin: “Dress” comes from the Old French “dresser,” meaning “prepare, arrange, straighten, put right.” Shakespeare was the first to add the prefix “un-.”
Quote: “Madam, undress you and come now to bed.” – The Taming of the Shrew

Rant
Definition: To talk loudly and in a way that shows anger: to complain in a way that is unreasonable
Origin: Derived from the Dutch “randten,” meaning “talk foolishly.”
Quote:“I’ll rant as well as thou.” – Hamlet

CLARIFICATION: This post has been modified to reflect varying views about the nature of word origins.