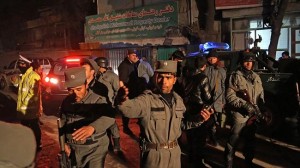 Taliban suicide attackers have killed at least 14 people, including the IMF representative in Afghanistan, in a gun and bomb attack on a Kabul restaurant popular with foreigners.

One attacker blew himself up on Friday outside the Taverna du Liban in the upmarket Wazir Akbar Khan neighbourhood and two gunmen stormed inside, mowing down staff and diners.

International Monetary Fund representative Wabel Abdallah, 60, was among the dead.
The Lebanese national was one of the most senior foreign officials to have been killed in Afghanistan.

“This is tragic news, and we at the fund are all devastated,” IMF Managing Director Christine Lagarde said in a statement.

The assault was quickly claimed by Taliban militants fighting against the Afghan government and US-led foreign forces in the country.

Deputy interior minister Mohammad Ayoub Salangi told AFP that two of the attackers forced their way into the heavily guarded restaurant after an initial explosion.

“At least 14 people have been killed. One suicide attacker detonated himself outside the restaurant and two others got inside indiscriminately killing people,” Salangi said.

Police and government officials said most of the victims were foreigners, but their nationalities were not confirmed. All three attackers died in the assault.

The Foreign Office in London confirmed that a Briton was among the fatalities and the UN said four United Nations’ employees were feared dead in the attack.

Staff and relatives told AFP that the restaurant owner was also killed trying to fend off the attackers.

The long-established Taverna has been a regular dining spot for foreign diplomats, consultants, aid-workers and Afghans, and is likely to have been busy with customers on Friday, the weekly holiday in Afghanistan.

Like many restaurants in Kabul, it ran strict security checks with diners patted down by armed guards and passing through at least two steel doors before gaining entry.

“I was sitting with my friends in the kitchen when an explosion happened and smoke filled the kitchen,” kebab cook Abdul Majid told AFP while being treated for leg fractures at a nearby hospital.

“A man came inside shouting and he started shooting. One of my colleagues was shot and fell down. I ran to the roof and threw myself to the neighbouring property.”

Elite security commandos rushed to seal off the small streets around the restaurant as sporadic gunfire erupted for a short time after the blast.

The venue has an enclosed outside seating area which is heated in the harsh Afghan winter, and customers often share a tobacco shisha pipe after their meal.

The Taliban’s main spokesman claimed the restaurant had been deliberately targeted.

“As a result of a martyrdom attack on a foreign restaurant in the Wazir Akbar Khan area of Kabul, a large number of foreign occupiers, most of them Germans, have suffered casualties,” spokesman Zabiullah Mujahid said in an emailed statement.

The Taliban often make incorrect claims about death tolls and the nationalities of those affected. The German embassy was not immediately available to comment.

The United States and British embassies are among those situated in Wazir Akbar Khan, though neither was directly affected by the attack. [AFP]