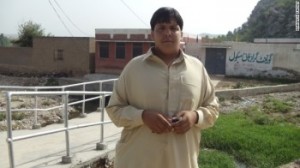 A 14-year-old boy is being hailed as a hero in Pakistan for tackling a suicide bomber — dying at the main gate of his school and saving schoolmates gathered for their morning assembly, CNN Reports.

Ninth-grader Aitazaz Hassan Bangash was on his way to the Ibrahimzai School on Monday in the Hangu district of northern Khyber Pakhtunkhwa province when the bomber, dressed in a school uniform, asked him where the school was, the teen’s cousin narrated.

“The other students backed off, but Aitazaz challenged the bomber and tried to catch him. During the scuffle, the bomber panicked and detonated his bomb,” he said.

Rajab Ali, who also witnessed the bombing, told CNN that he saw Aitazaz throw a large stone at a boy trying to enter the school. The blast happened when Aitazaz grabbed him, he said.

Aitazaz and the bomber died at the scene. Witnesses say the blast injured two other people. Iftikhar Ahmed, a Hangu district police officer, confirmed the details of the attack.

Hangu is a troubled district bordering Pakistan’s tribal areas. It is rife with sectarian violence, with attacks against Shia and Sunni Muslims.

“It was a great sacrifice to save the lives of hundreds of both Shia and Sunni students, who were in morning assembly,” Musadiq said.

Aitazaz is survived by his father, Mujaad Ali Bangash, a laborer; his elder brother, Mustajab Hassan Bangash, a student in Pakistan; and three sisters.

Local residents such as Nawaz Khan are calling for Aitazaz to receive a posthumous award for his bravery. “He saved the lives of hundreds of students. He deserves more recognition than Malala Yousafzai,” he said.

Pakistanis are comparing him to Malala, the schoolgirl shot by the Taliban in October 2012 for promoting education for all boys and girls.

Pakistanis on social media are praising Aitazaz’s bravery, with people on Twitter asking everyone to use hastags #onemillionaitzazs or simply #aitzaz and calling for his heroism to be recognized with an award.