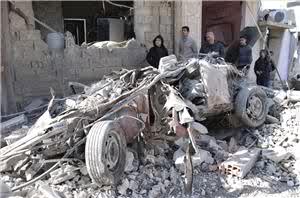 A car bomb has exploded near a school in the central Syrian province of Hama, killing at least 18 people and wounding dozens more, according to a monitoring group.

The UK-based Syrian Observatory for Human Rights reported on Thursday that the explosion took place in the village of al-Kaffat. Syrian state TV and activists said the blast caused extensive damage to the surrounding area.

The attack comes as clashes continue between rebels and al-Qaeda-linked fighters in several northern Syrian towns.

Rebels on Wednesday stormed the town of al-Dana, a stronghold of the al-Qaeda-linked Islamic State of Iraq and the Levant (ISIL) in Idlib, as fighting continued in al-Bab and three other towns in Aleppo province, Al Jazeera’s correspondent there said.

Since last week, a broad coalition of moderates and Islamists opposed to President Bashar al-Assad have been seeking to drive ISIL – which is accused of kidnapping, torturing and killing rival rebels and civilians – from its strongholds in the north and east of Syria.

Several rebel groups seized the headquarters of ISIL in Aleppo on Wednesday.

The infighting that erupted last Friday has killed more than 300 people, the Syrian Observatory said.

On Wednesday evening, activists said that ISIL, whose leadership is based in Iraq and members are mainly foreigners, detonated two car bombs near checkpoints manned by Syrian rebels in al-Bab, killing several people.

The blast came a day after ISIL urged people to target those who opposed them, including members of the Free Syrian Army and the main political opposition bloc, the National Coalition.

“All their members are legitimate targets. We have placed rewards on their heads. Kill them wherever they are found,” Abu Mohamed al Adnani, ISIL spokesman, said.

While rebels have been making swift victories in their battle against ISIL, the movement to remove Assad from power remains in disarray.

Clashes continued on Thursday between opposition fighters and Assad troops in several towns near Damascus and in the southern Deraa province.

In amateur video footage uploaded on the internet, helicopters can be seen flying overhead during the bombardment and the man filming accuses them of the attack.

Syrian government has been accused of dropping barrel bombs onto heavily populated areas from helicopters.

More than 120,000 people have been killed in the nearly three-year conflict in Syria. [AlJazeera]