Mother of the 18-year-old boy, Ikechukwu Lucky, who was arrested by the police in Lagos State for strangling a 12-year-old girl, Bose Ogoja, to death for money ritual, in Badagry area of the state, has said her son is possessed of an evil spirit that has been tormenting him. 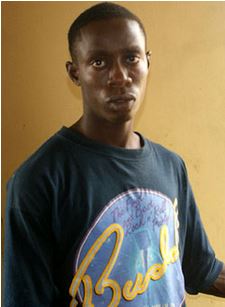 Esa Egbo, confessed to the journalists that her son had been arrested 4 times for attempting to rape little girls between the ages of 10 and 15 years by the police in Badagry Division.

Mrs. Egbo also said she and her family are members of Perfect Christianity Mission in Surulere area of Lagos, where Dr. Ofuche Ukoha (aka Sign Fireman) is the General Overseer, adding that her son does not know or have any access to the cleric, whom he claimed sent him to kill the girl.

Neighbour laid a curse on him

According to her words, two years ago a neighbour laid a curse on her son. She claims this then he started behaving strangely, thereby attempting to rape little children whenever he sees them.

“He started two years ago to molest girls in attempt to rape them. It is not an ordinary thing. You know some people are very good in hurting other people’s children. So for that reason I am suspecting that. He has been staying with me from birth and just two years ago when he was 16 years old, a man who lives close to us laid a curse on him. What happened was that we have a well in our compound and Ikechukwu and one of the man’s daughters were at the well fetching water and they had a quarrel. Ikechuwu beat up the girl and when the man returned he brought out a belt to whip Ike and I prevented him. He started boasting that he was going to make Ike useless and miserable. I thought he was joking but after that Ikechuwu started behaving funny.”

Mrs.Egbo adds that the boy wants to rape little girls whenever he sees any. However, their scream alerts people around, they would arrest and beat her son and then hand him over to the police.

“He has been arrested four times over the same offence and I am the one who normally goes to bail him.”

After one of such attempts the boy once told his mother that the demon came over him on his way to school and he gripped a girl and when the girl screamed he managed to escape so he decided to run away from home.

“I and the father went to beg the people whose child he molested and I decided to follow him to school through out his NECO examinations.”

The desperate mother also provides that the last try to rape a girl was made on December 10, 2013 at Imeke. He was imprisoned and charged to court. She got a lawyer who stood for him before he was granted bail.

In terms of the faithful day the boy told to his mother he was eating at the woman’s shop when he saw the girl passing and all of a sudden something came over him and he stood up and followed the girl and gripped her so tight and the girl screamed and died after which he regained consciousness.

“Ikechukwu was the most gentle of all my children but this demon destroyed his life.”

Contacted, Dr. Fireman told Vanguard that he was innocent of the allegations, saying he does not know the boy.