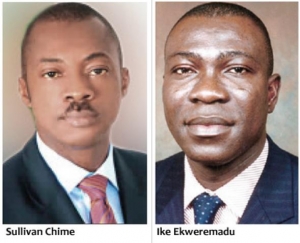 The perceived no-love lost relationship between Enugu State Governor, Sullivan Chime and the senator representing Enugu West Senatorial District in the upper chamber of the National Assembly, Ike Ekweremadu, went a notch lower as the Governor’s kinsmen rose from a meeting yesterday and declared their support for Ekweremadu.

The group said following due consultations, it decided to support Ekweremadu, who is the Deputy Senate President, based on his excellent track record in the Senate.

The development is coming amid popular belief that Governor Chime is eyeing the Enugu West senatorial district seat come 2015 after his maximum tenure of eight years in Government House must have elapsed.

Chime’s kinsmen said they are rooting for Ekweremadu’s candidature, which will be his fourth outing in the National Assembly, based on his achievements in their communities that are more pronounced than those by Chime, their brother.

Aneke said what mattered most to the people was quality representation and not how long Ekweremadu stayed at the Senate.

“The Governor has said that after two terms, there will be changes, but the will of the of the people must prevail; he has expressed his opinion but the people have the final say; if the PDP is a party that listens to the people, we are saying that we want this man to continue in the Senate.

“We are looking at quality representation, after all our brother is a Governor for about eight years now, when we are not drinking water, when we have no road; today, Umuabi now drinks water, Amokwe has road courtesy of Senator Ekweremadu.

“The Governor has the right to aspire for the Senate position, but we have the right to choose; let him present himself to us and tell us why he wants to run for Senate, we are the one that will determine who we will vote for”, he stressed.

They also noted that Ekweremadu has had quality representation in the national assembly and has given voice to their constituency and the south east in his three terms to the senate so far.

Some of Ekweremadu’s achievements, according to the UPF include his rural transformation agenda through numerous constituency projects and appointment of their indigenes to positions of service in federal agencies and parastatals.

They also stated that Ekweremadu’s commanding height as deputy senate president, speaker of ECOWAS parliament and chairman of National Assembly committee on constitution review speaks volume of his national appeal and key player in geo-politics of Nigeria.

A communiqué signed by Aneke and the Secretary General of UPF, Ogbuefi Chibuzo Onyia added that “consequent upon the foregoing, the Umuneke Progressive Front have passed a vote of confidence on senator Ekweremadu and urge him to re-contest the senatorial seat of Enugu west district for sustained service to the people of Enugu west, Enugu state, South East and Nigeria at large.

“We will continue to support senator Ekweremadu in his political endeavour and wish him good health and God’s guidance in his service to humanity”.