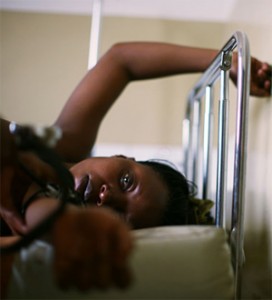 About 23 young ladies who wanted their unwanted pregnancies terminated, have reportedly died after they drank some herbal abortion concoction from a native home in Delta State, LeadershipNg reports.

Mr. Ikechukwu Aduba, the state police commissioner, who confirmed the discovering of the illegal home, said no fewer than 23 females whose unwanted pregnancies were terminated, died after drinking the concoction.

He explained that the detectives arrested the operators who were mainly native doctors and quack nurses and upon interrogation, confessed to the crime. The home is located around Ugborikoko in Uvwie local government area.

The suspects claimed they were trained in traditional medicine, especially in the use of concoction to terminate unwanted pregnancies.

One of their victims, a 22-year-old house-help in the area, identified as Endurance, recently died as a result of abortion she had performed at the home.

It was learnt that the victim took ill and was rushed back to the quack home where she died as a result of complications from the abortion she allegedly carried out in the abortion centre.

A test conducted on her death by medical experts showed that she was pregnant and attempted to abort it at the hands of the native doctors and quack nurses in the home.

One of the suspects, the police boss disclosed, identified as Ufuoma had made useful statements, adding that the police recovered different bottles with concoction and charms tied around sticks including locally made guns.