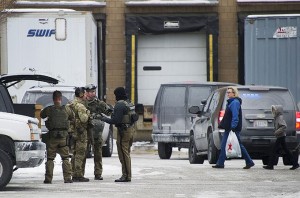 At least three people have been killed in a shooting at a popular shopping mall in a suburb of Washington, the US capital, authorities have said.

Howard County police said via Twitter that the shooting took place at the Mall in Columbia, a suburb of both Baltimore and Washington.

Police in the state of Maryland, confirming the fatalities via Twitter, said the suspected shooter at the Columbia Mall was among the dead.

“Police are in mall to clear people out safely,” it tweeted. “Mall is believed to be secure, but people inside should wait for police.”

People were directed out of the mall and into a parking lot, where some boarded a bus and others walked toward their cars. Some people were seen crying.

Authorities were alerted by an emergency call to police at 1615 GMT that indicated shots were fired, it said.

It did not immediately provide more details on the other victims or on the motive of the shooting. Later, the police said that two people with minor injuries were transported to a hospital for treatment.

Earlier news reports had said that the mall was on “lockdown” because of an “active shooter situation”.

Howard County Fire and Rescue tweeted they were en route to the scene, and urged local residents to “avoid area”.

The mall, which is at the centre of the town, typically opens at 10am on Saturdays and it was not known how many shoppers or workers might have been present at the time of the shooting.

Witnesses said they heard a succession of gunshots fired near the food court on the first floor of the mall.

The mall of about 200 stores in Howard County is a popular weekend destination for families and young children for its indoor carousel and play area.