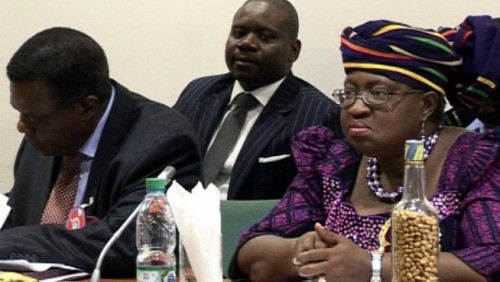 The House of Representatives Committee on Finance has accused the Minister of Finance, Ngozi Okonjo-Iweala of seeking cheap public sympathy following her claims that she was not feeling well when she appeared before members of the committee on December 19, 2013.

The lawmakers had taken into consideration Mrs. Okonjo-Iweala’s plea that she was ill and gave her 50 questions bothering on state of the Nigerian economy with a two-week deadline to prepare a written response. The minister’s insistence that she could respond to some of the questions thereafter was dismissed by the committee chairman, Abdulmumin Jibrin, who noted that from her feeble appearance, it would be insensitive to subject her to the rigours of attempting to provide answers to the issues at stake which he stressed “are very important”.

The two-week deadline has since lapsed on January 2.

While addressing State House correspondents in Abuja on Friday, Mrs. Okonjo-Iweala said she would need more time to answer the questions by the lawmakers.

“They have given me exams and I am sitting it and at some point, we have to come out of the exams room. Some of the questions are very weighty and you know some of us will need a bit of time to be able to tackle them”, the minister said.

While the lawmakers said they welcomed Mrs. Okonjo-Iweala’s request for more time to answer the questions, they faulted her initial stance to answer all the questions when she appeared before the committee on December 19.

“Isn’t it curious then that when she was not feeling well the Minister was prepared to address 50 questions in a session that was to last just about two hours, and now that she is fully fit, hale and hearty, ‘she is saying she would need more time’?” the lawmakers said.

The committee’s full press statement below:

STATE OF THE ECONOMY: 50 QUESTIONS

The attention of the House Committee on Finance has been drawn to a comment in response to reporters’ questions credited to the Honourable Minister of Finance and Co-ordinating Minister of the Economy, Dr. Ngozi Okonjo-Iweala, in which she likened the 50 questions on the state of the economy posed to her by the Committee to an examination.

She was also reported to have said she would need time to respond to some of the questions raised.

We view this as a welcome development as it denotes a vindication of the decision we took when she appeared before the Committee on December 19, 2013. The Committee knew that she would need time to answer the questions.

The Minister appears to be taking the memories of Nigerians for granted. This was the Minister who walked into the meeting with the Committee and drew everyone’s sympathy the moment she feebly announced that she was not feeling well.

Isn’t it curious then that when she was not feeling well the Minister was prepared to address 50 questions in a session that was to last just about two hours, and now that she is fully fit, hale and hearty, ‘she is saying she would need more time’? Nigerians would have expected her, in her present re-invigorated state of health, to tell them she would tackle the questions in 30 minutes!

For a Minister who sneakily avoided the Committee for eleven months, who relishes dropping the President’s name at every turn of such, 50 questions are even to us rather moderate, if not lenient. In a Committee of 31 members, each member would have asked no less than four questions, and that would have been over 100 questions, if she had been allowed to address the Committee as she had insisted when she appeared.

It is a good thing that Dr. Ngozi Okonjo-Iweala sees the task before her as an examination. The Minister is nonetheless reminded that exams have duration, and they are meant to be passed or flunked. However, we would not neglect to also remind her that there are consequences either way. There is reward for passing and reward for failure. One way or the other, we would decide how she performs.

It is regrettable that while talking to reporters after the presentation of the report of the 15-year strategic partnership on debt management between UK and Nigeria, the Minister accused critics of the huge domestic debt profile under her stewardship of lacking information. Interestingly, that is why the Committee invited her to share such information with Nigerians. It would also be an opportunity to let her know some of the things we know.

The DFID whose collaboration with Nigeria she is so enthusiastic about has published a report on the 2014 Medium Term Expenditure Framework. We strongly recommend that the Honourable Minister enrich her knowledge with that report. We also call on the DFID to present the report to the general public for the good of this country. Additionally, rather than all the speeches, why has the Minister failed to heed our call for her to present an exit plan (timetable) for domestic borrowing three years after taking over as Minister of Finance?

It is high time the Minister realised that we do not need any other country to tell us that our economy is doing well, the least of which is Great Britain with its deep economic problems and huge domestic debt profile. Nigerians will positively feel the impact if their economy is really doing well as the Minister claims.

Nigerians need to be vigilant of an attempt to divert attention from the state of the economy presentation and 50 questions we demanded from the Honourable Minister.

We call on well-meaning Nigerians to support this effort by the Committee on Finance so that we can know the true state of our economy in order for us not to end up like Greece whose genesis of economic problem was the concealment of the true state of her economy.

The Committee seizes this opportunity to remind Nigerians that it remains focused and committed to its legislative responsibilities as it awaits the response of the Minister to the 50 questions.

Signed: Clerk of the Committee