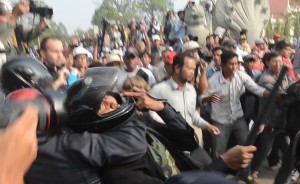 A grenade was lobbed at a wedding party in Cambodia, killing nine people and wounding 30 others including the bride and groom, officials said Sunday in an attack apparently carried out by a jealous lover.

Two children were among those killed in the attack, which happened late on Saturday and is thought to have been carried out by a man who was in love with the bride-to-be.

“They were happily dancing when the grenade exploded,” he said, adding that two girls, aged 7 and 14, were among the victims.

He said the bride suffered a broken thigh after she was hit by shrapnel while the groom was injured in his hand.

Police suspect the motive for the attack was a love triangle.

“We preliminarily suspect another man also loves the bride, and did not want the wedding to happen,” Horng Thul said, adding the police were investigating the attack.

No one has been arrested yet, he added.