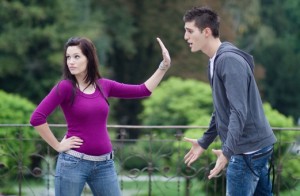 Let’s go through the checklist of 10 ways to tell a guy is not into you:

This is the biggest sign of whether or not a guy is into you. If he’s not into you, he won’t be “around”.

It’s funny – guys will act 100 different ways around the girl they like… they’ll even completely ignore her! Or tease her. Or be annoying.

But if they’re into her, it’s not a matter of how they’re acting. It’s the fact that one way or another, they always just seem to be acting that way around her.

He’ll find reasons to be close to you. He’ll always just seem to end up in the same parts of the room as you.

You may not have noticed it before, but once you start paying attention to it you’ll completely notice it. And if you don’t see that tending to happen with this guy, it’s a sign he does not like you.

2. Talks to you about being interested other girls comfortably.

So maybe you and him talk on a regular basis. If he talks to you about other girls or a relationship with a girl casually and comfortably, that’s a likely sign he’s not into you (in a romantic sense at least).

Now, a guy might talk about how another girl is hot randomly and sometimes that can be innocent. However, if you notice that he not only talks about other girls, but talks about how he likes her on more than just a physical level or that he wants to date her, then that’s very clear sign he’s not interested in you.

3. He has no interest in talking to you.

This is plain enough. If he doesn’t have interest in talking to you, it’s pretty much a given he’s not interested.

You need to be careful, though, to not assume he’s not interested just because he doesn’t text you back immediately. Guy’s and their texting habits can be tricky.

However, if he has ample opportunities to talk to you and never takes them, that’s a sign he’s not interested. On that same note, if you talk to him and he always finds a way to stop talking to you or always lets the conversation fizzle out and die, then it’s very likely a sign he doesn’t like you in a romantic sense.

4. Body language / general behavior: Avoids eye contact, positions body away, doesn’t encourage conversation or volunteer anything about himself. Maintains distance from you.

If he does any of the things listed in #4, those are pretty sure signs he’s not into you. There’s enough dating advice / flirting tips stuff out their that beats those points into the ground, so I’m not going to spend time on body language stuff.

So you set up a date and he’s flakey. He flakes constantly on you. If that’s the case: He’s not that into you (as they say) – missing a date or two is one thing, but a guy will make the time for a girl he’s interested in. Period.

6. No difference between how he talks to you vs. other friends. Casual tone of voice.

When a guy is interested in a girl, there’s always a slight difference in how he interacts with her. It may be subtle, but you’ll notice it. He’ll have some special way of talking to her or extend some special kind of attention to her that he doesn’t generally extend.

The best thing you can do to tell if a guy likes you is to pay close attention to how he interacts with others in general. Which brings me to my next point…

This is where I see a lot of girls get confused. They get all wound up because some guy totally swept them off their feet. He got their number, they had a charming conversation, she texts him and…

Nothing! Where did he go?

The problem is – that particular guy flirts with every girl. That’s just his way of being.

In fact, I used to have a habit of calling girls pet names like sweetheart, “hun” and stuff like that. I thought it was affectionate and nice, but I meant it in a platonic way.

I didn’t realize it, but I ended up leading girls onto thinking I was into them and they started crushing back on me. I honestly wasn’t talking to them this way to be flirtatious, but it came off that way.

I learned my lesson, and the lesson I want to impart here is that you have to pay attention to how the guy interacts with others in general.

Similar to above. Pay attention to how he interacts with others.

9. Doesn’t talk about feelings, doesn’t say I love you, says he’s “not sure what he feels” (a.k.a. I know what I feel and you would not respond well if I told you…)
This is more in the realm of relationship problem advice, but I figure it’s worth mentioning here.

If you’re dating or “seeing” a guy and it’s been going on for several months, the common warning sign that he’s not that interested is that he doesn’t talk much about his feelings.