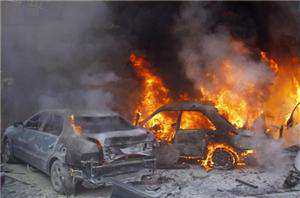 An al-Qaeda-linked group has said it carried out a suicide car-bomb attack killing at least four people in a Beirut suburb known to be a Hezbollah stronghold.

Tuesday’s attack at 11.10am local time in Shia-dominated Haret Hreik ignited a library close to other government and residential buildings.

A group calling itself Jabhat al-Nusra in Lebanon, believed to be a branch of Syria’s al-Qaeda faction, said it carried out the attack.

It said on Twitter: “With the help of God almighty we have responded to the massacres carried out by the party of Iran [Hezbollah]… with a martyrdom operation in their backyard in the southern [Beirut] suburbs.”

It was the second attack in less than a month on the suburb.

The Shia political party and armed group Hezbollah is an ally of the Syrian regime, and has sent thousands of fighters to battle alongside Syrian troops against a Sunni-dominated uprising.

The conflict in Syria has polarised Lebanon and increased sectarian tensions. Violence has spilled over the border and several large explosions have hit the capital.