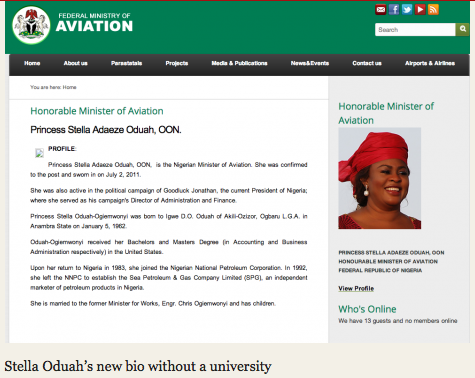 Following her involvement in a fresh certificate scandal, the Chairman of the Nigerian Bar Association, Ikeja Branch, Mr. Onyekachi Ubani, and the Coalition Against Corrupt Leaders, on Wednesday renewed their calls for the sack of embattled Minister of Aviation, Ms Stella Oduah.

CACOL’s Executive Chairman, Mr. Debo Adeniran, said that the scandal was a proof that Oduah was engrossed in primitive accumulation.

The Minister, who has barely escaped from a scandal involving the controversial purchase of bulletproof cars, landed in troubled waters again when an online news media, SaharaReporters had exclusively gathered contrary to Oduah’s claim in her profile on the Federal Ministry of Aviation’s website that she obtained a Master’s degree in Business Administration from St. Paul’s College in Lawrenceville, Virginia in 1982, that she did not obtain an MBA from the said institution.

Authorities at the Saint Paul’s College, Virginia, United States, have said that they are unable to confirm if indeed Oduah bagged a first degree in Accounting from the institution.

But the college did confirm that it had not at any time offered any graduate programme of any kind.

Since the news broke that she did not obtain a MBA degree from the college, several attempts had been made by the minister’s handlers to edit her resume and profile on different online platforms.

On Wikipedia for instance, her page was found to have been edited 19 times between 1.56pm and 5:05pm on Tuesday.

It is yet to be clear if President Goodluck Jonathan will this time heed calls for the minister’s removal after he remained aloof to previous calls for her sack following the public outcry that greeted her involvement in the purchase of two bulletproof BMW cars at N255m.

However, Ubani said on Wednesday that with the latest scandal there should be no reason why Oduah should continue in office as minister.

He said, “It is becoming very embarrassing. When the news broke out, I was concerned about whether thorough investigation was done before the story was published. But when by the second day the woman started deleting the records online, I knew something was in the offing.

“This was the same woman who broke extant laws in buying bulletproof cars far above the allowed limits; I think something has to be done now. It is even the right time for the woman to speak out.

“If such a person that lies about her certificate can spend additional second in office, it shows how badly we have descended as a nation”.

On his part, Adeniran said, “It is an eye opener to the fact that the woman is engrossed in primitive accumulation. If she had been properly educated she would not have engaged in prebendal politics with which she curried the favour of President Jonathan.

“It also shows how merit and technical competence have been sacrificed in appointing public officers”.