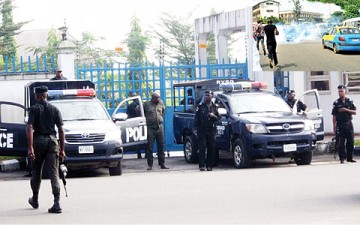 The Rivers State chapter of Peoples Democratic Party, PDP, has described as laughable, the allegations leveled against some leaders of the party, especially the Supervising Minister of Education, Nyesom Wike, following Sunday’s disruption of a rally organized by the Save Rivers Movement by the police.

The Rivers PDP also dismissed as untrue and completely false the claim by the state government and state chapter of the All Progressives Congress (APC) that the senator representing Rivers South-East in the upper chamber of the National Assembly, Mr. Magnus Abe was shot by the police, challenging them to provide proof beyond the images being circulated in the media, which it said were aimed at justifying the call for the redeployment of the state police commissioner, Mr. Joseph Mbu.

The PDP, which made this known through Jerry Needam, the media aide to the State Chairman, Chief Felix Obuah, justified the police disruption of the rally, saying the SRM did not obtain police permit before it decided to stage its now aborted rally.

The PDP said: “In November 2013, when Governor Rotimi Amaechi led irate youths to destroy the gate to the Port Harcourt International Airport, he directed all his loyalists to henceforth physical confront the police in Rivers State.

“It is most shameful and disgraceful that a serving Senator of the Federal Republic of Nigeria (Abe) would reduce to the level of confronting the Nigeria Police and turned a law breaker.

While scoffing at the alleged shooting of Abe, who is Chairman of the Senate Committee on Petroleum (Downstream) as “unfounded”, the PDP also described the purported killing of 5 children, as stated by the State APC and taking the senator out of Port Harcourt yesterday evening in a private jet, as laughable.

The ruling party said: “We challenge Governor Rotimi Amaechi, APC and their co-travellers to show us a bullet wound on Senator Magnus Abe.

“Their claims that Senator Magnus Abe was shot and wounded, as shown in pictures being circulated, and being flown out for better treatment, are all untrue and completely false.

“Their aim therefore, is to continue to further paint false impression that Senator Magnus Abe was shot and wounded by the police, to justify their call for the removal of the Rivers State Commissioner of Police, Mbu Joseph Mbu”.

The PDP in Rivers also stated that Wike and the PDP in the state had no hands in the APC and SRM’s alleged “concocted” lies, which it said were aimed at deceiving the Rivers people and other Nigerians.