ANGELINA Jolie and Brad Pitt have come to blows over the actor’s crush on Hollywood’s newest “It girl,” Lupita Nyong’o. 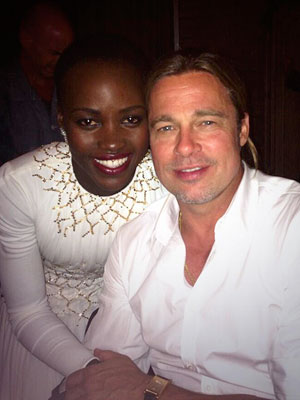 Brad, 50, is said to quite like 31-year-old Lupita, who’s been nominated for a Best Supporting Actress Oscar for her role as “Patsey” in the Pitt-produced drama, 12 Years a Slave.

Pitt was able to hide his crush from Angelina for a while, but he let the cat out of the bag when he publicly gushed about the Kenyan beauty at the Producers Guild Awards in Beverly Hills on Jan. 19.

After the show, Brad flew to Australia to reunite with Angie and their six kids, who have been Down Under while she’s directing the World War II film Unbroken.

“He wasn’t welcomed with open arms,” a source told the National Enquirer.

“Angelina read him the riot act when he arrived. She told him that he didn’t need to make his ‘crush’ on Lupita so obvious to the entire world. Angie is working her tail off, juggling directing duties and caring for their kids. Meanwhile, Brad is running around on the other side of the globe acting like a carefree bachelor.”

Sources say Brad and Lupita kept close throughout the event. When Leonardo DiCaprio snuck a kiss on Lupita’s cheek on the red carpet, Brad stepped in and jokingly warned, “Hey, man, stay away from my girl!”

“If you didn’t know better, you would have thought Brad and Lupita were girlfriend and boyfriend,” said the source.

“He is so smitten with Lupita that he’s already negotiating to line her up in another film that they can both star in together. He told her that he wants her to be his next leading lady.”

“Brad’s fixation with Lupita isn’t sitting well with Angie. Despite his devotion to her and their children, Angelina can’t let go of the nagging worry that Brad is on the prowl for the next hot thing to come along in Hollywood.”