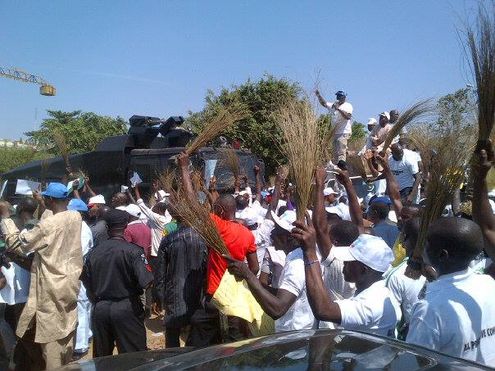 All Progressives Congress (APC) in Adamawa on Thursday said it had embarked on mass mobilisation campaign ahead of its nationwide membership registration.

The News Agency of Nigeria (NAN) reports that some APC chieftains, led by retired Brig.-Gen. Buba Marwa, and Chief Marcus Gundiri, have just concluded tour of senatorial zones in the state.

Marwa, former governorship candidate of the defunct Congress for Progressives Change (CPC), urged supporters of the party to come out in large number to register with APC.

Similarly, Gov Murtala Nyako, who along with four other governors, defected to APC, had directed his supporters to ensure they were not left out in APC registration.

The governor, who recently received the 27 local government chairmen and their councillors along with 37 state development area administrators into APC, urged them to mobilise their people for the exercise.

NAN reports that the situation has led to all former offices of the ACN, ANPP, CPC and some PDP transforming into APC in the state.

Speaking on the situation, the North East Protem National Vice Chairman of APC, Alhaji Umar Duhu, told NAN that it was a good development and “a big plus for the party”.

Duhu said the registration was expected to begin in January.

Duhu enjoined all the stakeholders to close ranks by working for the success of the exercise.

According to him, registration of members is a prelude for the victory of the party at all levels in 2015 general elections. (NAN)