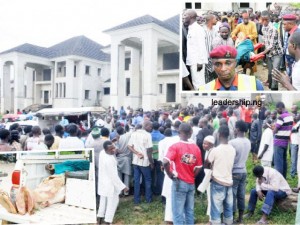 The trial of six policemen accused of killing six Abuja auto-spare parts dealers in 2005 suffered yet another setback on Monday, due to the absence of the presiding judge, Justice Ishaq Bello.

The office of the Attorney-General of the Federation is accusing the policemen of killing Ifeanyi Ozo, Chinedu Meniru, Isaac Ekene, Paulinus Ogbonna, Anthony Nwokike and Tina Arebun.

The deceased aged between 21 years and 25 years were returning from a night party in 2005 when they were allegedly killed by the policemen.

At the resumed sitting of the court, prosecution counsel, Chief Chris Uche (SAN) and counsel to the first accused, Mr Rickey Tarfa (SAN), were told that Justice Bello was on a national assignment.

Bello was recently appointed as the chairman of the Anambra Election Tribunal.
The court clerk, then gave them March 19, for continuation of the hearing.

It will be recalled that on July 8, 2013, Justice Bello granted the request of the prosecution to recall a witness, Mr Ede Ayuba, anAssistant Commissioner of Police,.

The court consequently dismissed the objection of Tarfa against the recall of Ayuba.

Tarfa had challenged the recall of Ayuba, who tendered guns and other weapons allegedly recovered in connection with the incident, because it contradicted section 237 of the Criminal Procedure Code.

But the prosecuting counsel, Uche, urged the court to overrule the objection because the witness only came to give his evidence as well as tender supporting exhibits.

In his ruling, Justice Ishaq Bello held that the recall of the witness was in line with the relevant sections of the law, andtherefore dismissed the defence counsel’s objection.

Earlier, the judge had admitted certified copies of medical report of the examination conducted on the deceased.[NAN]