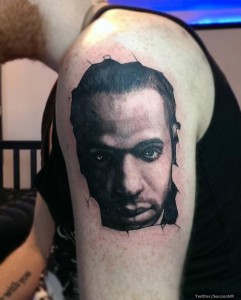 Thierry Henry is known for his love of tattoos – so he would no doubt be impressed with this incredible likeness of himself inked on a fan’s arm.

The extraordinary piece of body art, depicting the stern countenance of the former France and Arsenal star complete with luxuriant black hair, designer stubble and piercing dark eyes, surfaced on the Twitter feed of Sky Sports’ Soccer AM programme.

The tattoo is sported proudly on the left arm of a ginger-bearded man clad in what appears to be a black vest and with a gold chain around his neck.

A tweet accompanying the photo described the tattoo as “impressive” – and other Twitter users appeared to endorse this view, with many retweeting it and even more favouriting it.

Henry, 36, scored 175 goals in 258 appearances for Arsenal before moving to Barcelona.

He currently plies his trade for New York Red Bulls in US Major League Soccer.

Share
Facebook
Twitter
WhatsApp
Previous articleWoman Learns Her Stolen Car Is Hidden, She is Asked to Pay Over $1K For Its Return
Next articleKeshi Praises Eagles Resilience, Says Go for Gold.
- Advertisement -