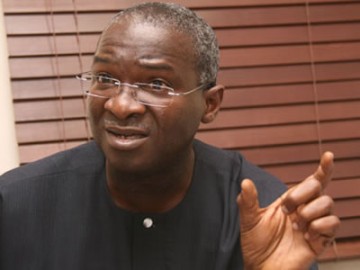 Governor Babatunde Fashola of Lagos State on Wednesday denied that the state’s Atlantic City Project was the cause of recent flooding in the state. He said the project has instead provided the state some protection against flooding and reduced the problem of ocean surge.

Mr. Fashola said this while speaking at a meeting with some heads of corporate organisations in Lagos.

He described criticisms that the project was responsible for previous flooding in the state as unfair, saying the problem was actually a consequence of global warming.

The ongoing Atlantic City Project is a 10, 000 square metre proposed settlement on the Atlantic Ocean.

About 1, 200 high rise buildings are being planned for the project, while no fewer than 400, 000 people are projected to live and work there on its completion.

The project has been criticised by some people who claimed it was the cause of recent flooding witnessed in the state.

But the governor said “It is not true that any flooding in the state is attributable to our Atlantic City Project.

“We have taken the best advice and the best professionalism has been deployed into salvaging those parts of Lagos consumed by ocean surge.

“If there is any requirement at all to know whether the project was working, let us cast our mind to about 15 years ago when, at the peak of the rainy season, the flooding used to get to Law School and NTA in Victoria Island.

“But we have not had that kind of flooding in the last five to six years, even at the peak of rainfall.

“That means the solution is working. Whether it would solve the problem permanently, I don’t know. But for now, it is working”, Mr. Fashola said.

He said his administration is committed to supporting businesses in the state through the creation of an enabling environment.

Mr. Fashola urged organisations to fulfil their obligations to the state to enable government bring more development to the state.