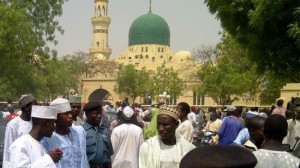 The Chief Imam of Al Furqan Jumaat Mosque in Kano, Dr. Bashir Aliyu Umar, has described the attack on Buhari loyalist, Abdulmajid Danbulki Kwamanda inside a worship centre last week as an act of cowardice.

The chief Imam who was confronted with violence in his mosque penultimate week stated this during the Friday sermon, warned that “the mosque is a sacred place where only one and true God is worshipped and should not be used to settle perceived political scores”.

“It is certainly an act of cowardice to attack a perceived enemy in the mosque, its unhealthy, unwise, provocative and brazen affront on the Supreme Being”.

Kwamanda, a chieftain of the All Progressives Congress (APC) in Kano State was last week attacked by hoodlums inside the Jumaat mosque in Kano. The hoodlums wouldn’t stop battering him and he almost gave up in their hands, but for the timely intervention of good Samaritans who rescued him into the chief Imam’s residence inside the mosque.

Speaking with reporters later, Alhaji Danbulki who wept uncontrollably had said; “Thank God I was rescued alive from the thugs and I am suspecting that it was former Governor of Kano, Malam Shekarau who assigned them to do so because they came inside the mosque in his convoy.

“Shekarau and Salihu Sagir Takai were there and they are their supporters who attacked me. I believed and I have no doubt that it’s him that directed them to attack me.

“I reported the matter before the police at Bompai and also will sue him to court over my attack. I believed that the attackers targeted to kill me if you see how they tore my clothes into pieces”, Danbulki had said.