James Ezuma, a medical doctor nabbed by the police in Owerri, Imo State, for operating baby factories, is the face of child trafficking in Nigeria. 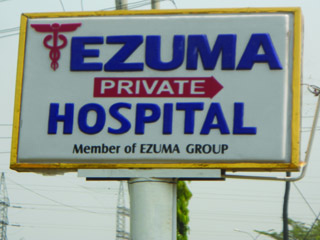 The signboard of the ‘hospital’

The glassy signpost with blue, white and black lettering promises would-be visitors succour. Its delicate frame announces to the public the presence of a private hospital. Near this board is another with less aesthetic appeal on a lonely street off Egbu Road, in Owerri metropolis, which announces to the vulnerable, a place of refuge.

The wordings on this board, strong enough to comfort even the most disheartened, have been revealed as a decoy to perpetrate evil. The place is “Ezuma Women and Children Rights Protection Initiative. FG Approved NGO Homeless Babies Home,” which, until last month, was the epicentre of child trafficking, with a baby production regime, as if in an industrial factory, in full swing.

At the peak of his career, Dr. James Ezuma, who claims to have studied at the University of Jos, was the poster child of successful medical practice. His vast empire, including real estate, posh automobiles and women, advertised him as a man who attained success through dedicated commitment to his profession.

His physical wealth was complemented by a long list of clientele and friends in political and business circles. This probably explains why, with impunity, he could operate his purported hospital and Non-Governmental Organisation, NGO, in a building for which proper building permit was never obtained.

Yet, he was there for many years without the concerned officials raising eyebrows. For the sheer size of his wealth, the undiscerning public held him in awe. The church bestowed a knighthood on him for his commitment to charity! This was before the police flashed their detective klieg lights on his activities. 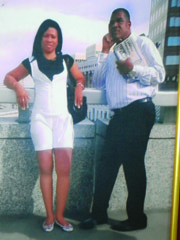 What they saw however, negates the very essence of the medical guild. In Aba, the commercial nerve centre of Abia State where Ezuma operated from before he was declared wanted, the 65-year-old drew respect and fear in nearly equal proportions. His five-storey ‘hospital and charity home’ on 101 Okigwe Road, Aba, was frequented by high-heeled guests and ‘patients’ who visited mostly at night in sleek automobiles.

Their purpose: to purchase a child. The cost of land in the eternally busy Okigwe Road is estimated at N10 million per plot. Sources say the magnificent edifice may have been erected on over five plots of land. Neighbours and passers-by who dared prey into his activities in this fortress suffered losses as a result.

A former associate of his told this magazine that any medical practitioner, who challenged his baby dealer’s reptilian practices, suffered either physical harm or had his clinic shut down. His network of friends, some believed to be in privileged positions of government, ensured that he never suffered harassments.

And when he did, they made escape routes available to him. Competent sources in the police force say he had been detained by the police but on such occasions, he was let off the hook. 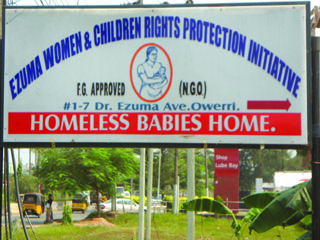 Deception: The signboard contravened what happened in the ‘home’

The building which has been demolished by the Abia State government following its owner’s arrest in Owerri, was a den where innocent children were herded as raw material for his baby production factory. Here, Ezuma, working in tandem with his network of collaborators, brought girls, some pregnant, claiming to help provide anti- and post-natal services to them.

Thereafter, the impostor claimed he offered them humanitarian services such as rehabilitating the teenage girls, while offering the children out on adoption. The inside of his so-called hospital before it was pulled down, fared even less than a dispensary.

With a promise of good life and health care cover for the unborn child, the girls were coerced to give up their children for pittance, sometimes as low as N50,000 to N200,000. The methods of harvesting the babies, this magazine learnt, were debasing of the ethics of gynaecological practice. Using induced labour and crude delivery methods, Ezuma reportedly harvested even unripe pregnancies to satisfy his patrons.

Although he made little noise about his sleight-of-the hand child production prowess in public, Ezuma was the definition of impudence. Following several half-spirited battles by the police with him in Abia State, Ezuma, who hails from Ndiokeke Ndiakunwata, Arondizuogu, Ideato North LGA, Imo State, fled homewards. Owerri was where he relocated his lair and operational headquarters.

Ezuma’s non-governmental organisation, sited on a virgin expanse of land was work-in-progress. With a storey building in advanced stage of completion, the multi-acre plot is littered with materials procured for building projects. On the left entrance to the facility is a small wooden house used for a church. The church previously had a land-related squabble with the doctor. 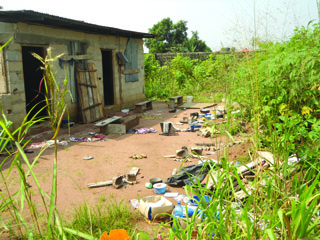 The main building that housed his family served as the ‘consulting’ as well as ‘delivery’ wards of the hospital. The rest of the vast landmass is used for the cultivation of cassava, which separates the administrative area from the girls’ or patients’ ward. The environment where the innocent girls lived froths with weeds and dirt. The living conditions were as decrepit as the character of the man who ran the home.

Eight girls were confined in each of the two rooms, with neither ventilation nor permanent windows and doors. Gloom surrounds the ambience. It was in the quietude that pervades the place that the Ambush Squad of the Imo State Police Command nabbed him pants down, setting free 16 innocent girls, many of them at various stages of pregnancy.

Conservative estimates indicate that Ezuma’s land in Owerri values at hundreds of millions of naira. The structures at several stages of completion in the compound are evaluated at over N20 million. His deep pocket also reflected in his wealth. And he relished the comfort. Among the vehicles recovered from him were: a Jaguar, two Chrysler cars, a Lincoln Navigator, a Honda Jeep, a Nissan Quest, a Pathfinder Sports Utility Vehicle and three unidentified others.

The Imo State Police Commissioner, Muhammad Musa Katsina, said: “Have you seen Ezuma’s vehicles? When you see them, you will know the value of these vehicles. For goodness sake, in a disciplined country like Nigeria, how can somebody have 10 exotic cars without any single documentation? With impunity, they were all parked there, without a single documentation.” 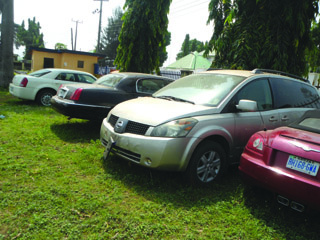 Ezuma’s libertine inclinations are not limited to pecuniary benefits. His philandering is also legendary. “His marriage to his first wife failed sometime ago. The woman, a lawyer, left him because of his criminal tendencies which she condemned. The one he lived with until he was caught was actually their house-help. And he’s got other concubines,” a source who knew him closely said. In his world, beautiful women are complemented by lush automobiles!

Nkrumah Bankong-Obi Apart from indulgence in child trafficking, the police allegedly found an unregistered firearm in his home. This forms a fraction of the 18-count charges leveled against him in court. This adds up to the fact that his medical licence was seized by the Nigerian Medical Association, NMA, for improper conduct.

In the real sense of the word, Ezuma was not operating a hospital. In the words of Katsina: “You don’t need to be a medical doctor to know what qualities a place should have to be a hospital. Here is a man who is in his 60s who calls himself a medical doctor and said: Dr. Ezuma Private Hospital. What is the definition of a hospital?

And yet, after graduating his wife, she came out without a certificate. Yet she was the one delivering babies. In the same hospital, ask them, where are the beddings, where is the labour room? Find out if you can get any injectable material. Even ordinary iodine or panadol is not there. It was a crude way of delivery.”

Katsina described Ezuma as an animal in human form, too dangerous to mankind.