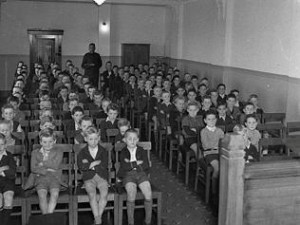 Boys living in Salvation Army homes in the 1960s and 70s were subjected to brutal sexual abuse and a Dickensian ritual of forced labour and sadistic punishment – which included children being locked in cages or made to eat their own vomit.

The royal commission into institutional responses to child sexual abuse this morning began examining shocking cases of abuse at four of the charity’s boys’ homes – two in Queensland and two in New South Wales, Australia.

Counsel assisting the commission Simeon Beckett said the evidence of abuse would be “at the severe end” of the already disturbing cases put before the inquiry.

157 claims relating to child sexual abuse in Salvation Army homes in New South Wales and Queensland have so far been received – 133 of which resulted in apologies and, in some of the cases, payouts of up to $100,000.

Between 1966 and 1977 – the main focus of the enquiry – allegations were raised against many of the men, but they were often moved to work in different homes rather than prosecuted for their potential crimes, the commission heard.

Boys who complained were singled out for particularly brutal punishment, including several cases in which victims who went to police were returned to the Salvation Army homes where they had been abused for further beatings.

Mr Beckett said the physical abuse boys suffered in the homes would be “shocking to many”, with children suffering broken bones and dislocated limbs in some of the worst attacks.

At the Salvation Army’s home at Bexley, in Sydney, boys reported being forced into sex acts by both staff and older residents – including numerous allegations against both captains McIver and Wilson – as well as repeated physical abuse.

“One former resident … recalls being punched and knocked off his chair after being told not to and then being caned,” Mr Beckett said.

At the Gill home in Goulburn, boys were subjected to humiliating punishments like parading around their sheets if they wet the bed and in one case a boy was forced to eat his own vomit.

It was there that Wilson – who has been described as the “most serious offender” in the eastern states – sexually abused two of his up to 17 victims between 1970 and 1973, the commission heard.

But despite Salvation Army officials being warned about Wilson’s misconduct, he was moved to another home at Indooroopilly in Queensland – where he went on to abuse another five boys over a one-year period.

While there, he reportedly subjected boys to a daily “sick parade” during which they were “physically inspected” in private sessions where he also sexually assaulted some of the young boys.

Wilson later moved to Bexley, where he abused another seven boys.

He resigned from the organisation in 1982 and died in 2008 having been acquitted of the only charges levelled at him, which all related to his time at Bexley.
The Salvation Army has so far paid out $1.2 million to his victims.

Meanwhile, as early as 1970, Queensland authorities recommended another home at Riverview should be closed because of the danger to boys there – but it was kept open because the government had no other facilities to house its 45 residents.

Boys complained they were not given shoes to wear while labouring on the farm and they were sometimes given food intended for animals to eat as well as being forced to drink river water when the tanks ran dry.

Kate Eastman SC, representing the Salvation Army, said the organisation accreted many residents had “horrific experiences” in its boys’ homes, including sexual, physical and emotional abuse.

“This hearing will bring to light the greatest failures in the history of the Salvation Army in Australia … there will be no cover up and no wish to justify (that abuse),” she said.