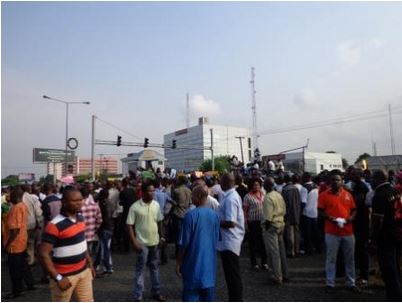 The protesters comprising youths, young and elderly men and women barricaded the popular G.R.A. junction of Port Harcourt, a development that made motorists to spend more than two hours on a grid lock which spanned up to the Isaac Boro park.

The protesters were carrying placards which bore inscriptions such as “We will not stand by impunity, leave Mbu alone”, “International Airport will be shut down if Mbu leaves Rivers State”, “I.G. thanks for giving us Mbu”, “South South man cannot betray his brother, we love Jonathan”, “Jonathan will come in 2015”.

These crowds were guarded by the team of anti riot policemen led by a chief Superintendent of police, David Osuani.

The protesters who took over the entire stretch of Aba/Port Harcourt road up to NDDC secretariat sang solidarity songs in praise of President Goodluck Jonathan, the supervising Minster of Education, Nyesom Wike and Rivers State commissioner of police, Joseph Mbu.

The Chairman of Ikwerre people’s Assembly and the spokesman of the protesters Barrister Chima Bombs said the people of Ikwerre ethnic Nationality decided to go on a street protest to condemn the continuing attack on the office and person of President Goodluck Jonathan, the Minster of Education and the State commissioner of police by those he described as disgruntled and frustrated politicians.

“Rivers people and indeed Nigerians would recall that prior to the assumption of the commissioner of police, Joseph Mbu, in Rivers State, indiscriminate arrest and illegal detention, harassment and intimidation, revocation of C of Os, compulsory acquisition without compensation and demolition of properties without notice to persons who held and expressed contrary views to that of Amaechi led administration was the order of the day”.

“The resumption of CP Mbu as commissioner of police , Rivers State effectively put to an end the reign of impunity , lawlessness , harassment and the abuse of the fundamental rights of the citizens by Gov Amaechi. CP Mbu since assumption of office has demonstrated and exhibited an uncanny zeal , dexterity and enthusiasm in the art of policing the State , hence the peaceful and serene atmosphere pervasive today in the State which ironically and indeed inexplicably does not go down well with the Governor,” he said.

Bar. Chima Bombs condemned what he called “the theatrics and antics of Senator Magnus Abe and his gang of brigandage”, which he said was orchestrated to achieve “his inordinate ambition to emerge as Governorship candidate for the APC”.

He threatened that the people of Ikwerri ethnic Nationality will resist any attempt to redeploy the commissioner of police adding that “any redeployment of CP Mbu at this time will be asking for the total shut down of all entry points to Rivers State including the international airport which the Ikwerre people play host to and all the oil wells, flow stations and facilities operations in our land”.