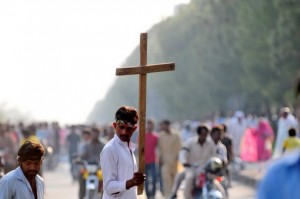 A 65-year-old British man was sentenced to death in Pakistan for blasphemy — even though he is mentally ill.

Mohammed Asghar has spent four years in jail after he was arrested after writing letters to people claiming he was a prophet.

But a medical panel throughout a defence argument Asghar – believed to have family in Scotland – he had a history of mental illness.

Even his lawyer, Sara Bilal was forcibly removed from the case by the judge and proceedings were carried out behind closed doors.

But she intends to appeal the verdict, delivered just late on Thursday, only hours before Friday prayer day.

Some observers say the capital punishment order is unlikely to be carried out because the country has had a moratorium on the death penalty since 2008.

Pakistan’s controversial blasphemy laws carry a potential death sentence for anyone deemed to have insulted Islam.

But several recent cases have prompted international concern, and critics argue the blasphemy laws are frequently misused to settle personal scores and that members of minority groups are also unfairly targeted.

In 2012 the arrest of a young Christian girl, Rimsha, on blasphemy charges provoked international outrage. After being detained in a high security prison for several weeks she was eventually released and her family subsequently fled to Canada.

Blasphemy is a highly sensitive issue in Pakistan, where 97% of the population are Muslim.

Muslims constitute a majority of those prosecuted, followed by the minority Ahmadi community.