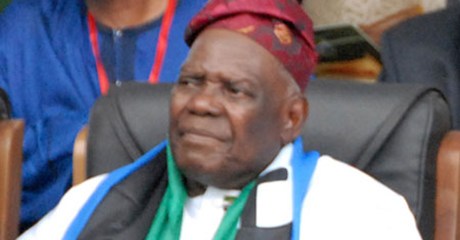 Some leaders of the All Progressives Congress on Thursday converged on Lagos to honour the party’s Interim National Chairman, Chief Bisi Akande.

The News Agency of Nigeria reported that Akande, a former governor of Osun and the last National Chairman of the defunct Action Congress of the Nigeria celebrated his 75th birthday at Eko Hotel, Lagos.

Others are Governors Rauf Aregbesola of  Osun; Babatunde Fashola of Lagos; Rochas Okorocha of Imo; Adams Oshiomhole of Edo; Tanko Al-Makura of Nassarawa; Rotimi Amaechi of Rivers; Abiola Ajimobi of Oyo; and Ibikunle Amosun of Ogun.

In his opening remarks, Buhari described Akande as a man of unquestionable and rare integrity.

“Our major concern as Nigerians should be how the nation can get leadership that will use its resources in a most honourable way”, he said.

Delivering a lecture on “Developing a New Leadership: An Imperative For National Development In Nigeria,” Prof. Olu Obafemi of the National Institute for Policy and Strategic Studies,  said that visionary leaders were in short supply in Nigeria.