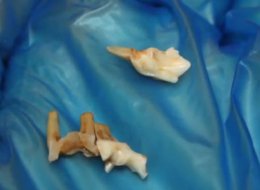 Chew on this: A Canadian teenager was eating some Spanish peanuts and discovered one of the nuts was actually a human tooth.

And it wasn’t his own either.

Graham Calder, 18, was celebrating New Year’s Eve with his girlfriend, Michaela Epp, when he grabbed a handful of peanuts he had purchased at a Safeway in Winnipeg.

Epp, also 18, says Calder realized as soon as he chomped down that he wasn’t eating peanuts.

“He spit it out and looked at it, and it was a tooth, so he started feeling around to make sure it wasn’t his,” she said, according to Canoe News.

The mystery tooth was broken into three parts, but appeared as if it had been pulled right from someone’s gum.

The brand of peanuts that Calder purchased was processed in Canada.

Calder reported his unappetizing discovery to the Canadian Food Inspection Agency, which is now testing the tooth, the Winnipeg Sun reported.

A Safeway spokesman told the paper that the company will cooperate fully with the agency’s investigation.

Finding someone else’s tooth in your peanuts is hard for anyone to swallow, but Epp says Calder is trying to see the bright side of things.

“[When it happened, Calder] looked at me and said, ‘That’s one way to start things,'”she said, according to the Daily Mail.