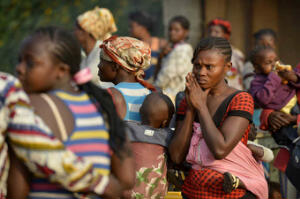 UN officials have warned the Security Council that the Central African Republic is on the brink of a catastrophe, with half the population made homeless since ethnic warfare broke out.

UN political affairs chief Jeffrey Feltman told the council on Monday that about 2.2 million people throughout the country need assistance, about half the total population.

About half the people of Bangui have been driven from their homes, a total of about 513,000, he said. An estimated 100,000 people are seeking shelter at a makeshift camp at the airport near the capital.

The Central African Republic has been plunged into chaos as the country’s Christian majority seeks revenge against the Muslim rebels, who seized power in a coup in March. Fighting between Christian and Muslim militias intensified in December.

An attack on Bangui by the Christian militia calling itself the anti-Balaka on December 5 triggered heavy unrest in the capital, Feltman said.

A report in late December by Secretary General Ban Ki-moon reported 600 deaths in Bangui in those attacks, and Feltman put the current total at “750 casualties” in the capital.

“The death toll outside Bangui is likely to be substantial,” he said. “Killings in Bangui and the rest of the country continue every day, and the population remains divided along religious affiliation,” Feltman said.

The UN Children’s Fund warned at the end of December, that children are being recruited into the militias, and verified the killings of at least 16 children since December 5, two of whom were beheaded.

In December the Security Council authorised a multinational African peacekeeping force, which is expected to increase its troop strength from about 2,500 to 3,500, to keep a lid on the violence. France also sent in about 1,600 troops on December 9 to back them up.