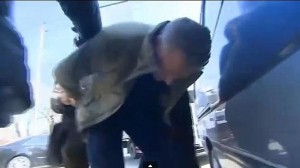 Chinese police have been caught assaulting a CNN reporter and his camera crew and pushing them into a van while they were in the middle of filming.

CNN reporter David McKenzie was in Beijing to report on the trial of Xu Zhiyong, an activist accused of “gathering a crowd to disturb public order” after he organised protests against China’s elite.

His trial is being closely monitored by Chinese authorities, who are trying to keep the media away.

The footage shows McKenzie reporting from the middle of a public street before a policewoman puts a stop to the report.

He frees himself – but then more security agents in uniforms and plainclothes gang up around the journalist and his crew.

McKenzie and his cameraman are kicked and punched as he tries to tell them they are able to report from a public place.

“We are reporters. We are reporting in a public space,” McKenzie pleads, before he is shoved in to the side of a nearby van.

“This really shows how much China wants to manage the message,” McKenzie said after he and his crew were taken away from the courthouse.