The Catholic Archbishop of Lagos, Most Reverend Alfred Adewale Martins in a recent interview cleared the air about Pastor Chris Okotie’s offensive comments against the Catholics. 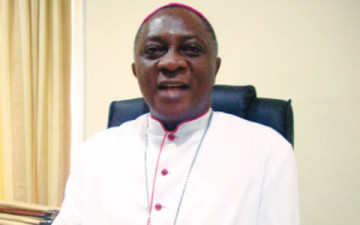 I believe that that kind of statement could only have come from an ignorance of what the church believes in and ignorance of what the Catholic Church professes. I will not like to believe that it was an act of ill will, but rather an act of ignorance. For that reason, it is only appropriate that people should seek to understand what others believe, not from their own point of view but from the point of view of the believer.

In other words, what should have happened is to ask the church-what do you believe about Christ? What do you believe about Mary? I think that was not done and that is why it is difficult to draw a line between ill will and ignorance in this matter. However for any Christian, Jesus is the saviour. Jesus is the son of God who became man in order to save us. It is at the name of Jesus that every knee shall bow and every tongue confess that Jesus is Lord. So there is absolutely no question about the place and position of Jesus in Christianity.

Catholic Church being the mother church, we teach the basic thing. So it’s absolutely beyond controversy about what the church believes with regards to Jesus and his place in the realms of our salvation. Without Christ, there is no salvation; he’s the way, the truth and the light. And so there is no confusion in the minds of any proper Christian with regards to the position of Christ. But of course, in the Catholic Church, it is quite clear in our minds that God used Mary as an instrument by which God would become Christ.

The scriptures have told us that she’s blessed among all humans and everyone knows that we all regard Mary as human like you and I. Except of course that she was given that honour which no one else had, being the mother of Jesus. So if she’s the mother of Jesus, naturally, she deserves reverence. She doesn’t deserve worship or adoration. God was the first person to honour her when he said she would be the mother of Emmanuel. So if God honoured her, it is only appropriate that we who are creatures of God should fall in line and give her the honour that is due to her as the mother of God. That is basically what the Catholic Church does with regards to Mary.

In fact, there is a song that we sing in the Catholic Church that says we are honouring Mary. That is for the sake of those who have this misconception. I’m surprised that Pastor Okotie has not heard this before, really.

But he also said that the Pope is antichrist…

Well, he will have to explain what he means but there is absolutely no reason why he should regard a man who is leading the body of Christ that is spread all over the world and giving the leadership that the whole world is looking up to at this point in time, as an antichrist. Even the secular media declared that this man was the man of the year, even though, he has not spent up to one year in office. I think that should say something.

Well, the pope has said just like Paul said, that he doesn’t depend upon human acceptance, he depends on God’s approval of him. So in the same way, the pope’s personality, role and work do not depend on human approval but at the same time, that humans also approve him is a testament to the fact that he’s playing a role that he’s supposed to play both in the church and in the world. So why he should call him an antichrist is what I can’t understand. Again, ignorance or ill will, we do not know where to draw the line.

So how would you describe Pastor Okotie based on what he has said?