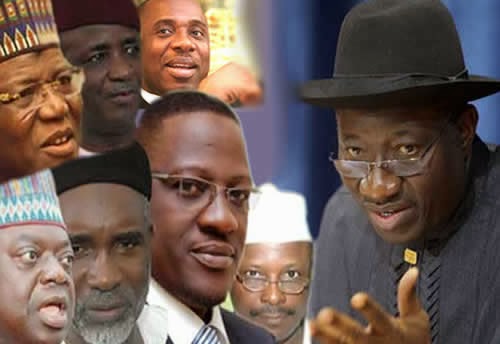 The newly appointed national chairman of Peoples Democratic Party, PDP, Alhaji Adamu Mu’azu, has launched a passionate appealed to the five governors, known as G-5 Governors, and other party chieftains that defected to All Progressives Congress, APC, to have a rethink and return to the ruling party, which he described as ‘home’.

The defected governors are – Abdulfatah Ahmed (Kwara), Aliyu Wamakko (Sokoto), Murtala Nyako (Adamawa), Rabi’u Kwankwaso (Kano) and Rotimi Amaechi (Rivers). Most of the House of Representatives’ members of the affected states have also decamped to APC with their colleagues in the Senate threatening to follow suit.

As a sign of good faith and his commitment towards reorganizing the party with a view to reconciling all aggrieved members, Mu’azu, whose appointment as PDP national chairman was ratified on Monday following the resignation of Alhaji Bamanga Tukur last week Thursday, hinted that he would set up a committee to address their grievances and where the party has been found to have erred in its actions, would not hesitate to apologize.

Speaking yesterday when the governor of Jigawa State, Alhaji Sule Lamido paid him a courtesy call in his office at the Wadata Plaza national secretariat of the party in Abuja, Mu’azu said: “Those of them that have gone, I wish to appeal to you to please come back home”.

He pleaded with the defectors to reflect on what they had benefitted under the platform of the party, assuring that the culture of impunity that forced some of them to leave in the first place will be a thing of the past under his leadership.

“I appeal to you to have a sense of patriotism for your party. The party that has offered you a lot, reflect, think and come back our doors are open.

“PDP made most of the people and we expect that whatever be the case, we should remain within and correct the needful for us to move forward”, he added.

The PDP national chairman assured the governors and other aggrieved members of the party that the party would review everything that had happened. He said such things that had led to the party reducing in number and in size would be looked into with a view to addressing them.

He added that he would make due consultation with major stakeholders of the party before constituting the ‘high level’ reconciliation committee.

Mr. Mu’azu, however, appealed to Mr. Lamido to be part of the committee, which he said, would be constituted soon to go round the country to visit aggrieved members of the party. He hinged his plea for the Jigawa governor to be part of the committee based on the fact that he was a member of the original ‘G-7 rebel governors’ and so should have the ears of his five colleagues.

Earlier, Mr. Lamido said the visit was to congratulate the new party chairman and pledge the support of Jigawa people to him.

Recalling with sadness the events that led to their anger with the party, Lamido said the PDP under Tukur’s leadership was divisive and vindictive.

“I hold nothing against Alhaji Tukur because I respect him as my elder. But one cannot be happy seeing party members being suspended and chased away by the leadership.

“The PDP failed under the last leadership. If Governors and National Assembly members were leaving and you said you were not worried, then you should know that something is wrong with you.

“Many of our members were unjustly insulted, humiliated and abandoned by the immediate past leadership of the party. The G-7 Governors were made to feel unwanted, pained and traumatized”, Lamido said.