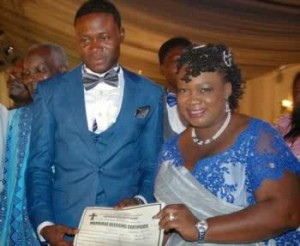 Wait ooh, why are all Nigerian celebs constantly blaming bloggers and the media when their relationship collapse???

The female comedienne accused the media of writing negative stories about her marriage before it finally collapsed.

The comedienne stunned everybody when she announced that her seven month-marriage to Adesolaha was over even before it started.

In an interview with Encomium, Weekly, Princess accused the press especially the bloggers of writing negatives stories about her marriage making it look like they actually wanted it to break down.

‘The Press, the so called bloggers many of whom are not credible kept on writing things that weren’t happening at all’. She further said ‘That is why I said that now that the marriage has crashed I hope they are happy’, she concluded.

The Comedienne’s much publicized marriage collapsed in December 2013, seven months after they got married.