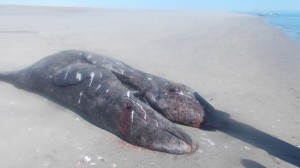 In a rare find, two conjoined grey whale calves were discovered in a lagoon in Mexico.

The National Commission for Protected Natural Areas released photos this week of the whales, which were discovered in the Ojo de Liebre lagoon in Los Cabos on Jan. 5. The four-metre long whales only survived for a few hours, the commission said.

The whales shared a body, but had two heads and two tails.

Grey whales are enormous animals as adults. An adult male can grow to 14.6 m in length, while females are slightly bigger than males, the Vancouver Aquarium says on its website. They have the longest migration route of any mammal, starting in winter breeding lagoons in Baja California, Mexico, and travelling all the way up to Alaska and the Bering Sea.