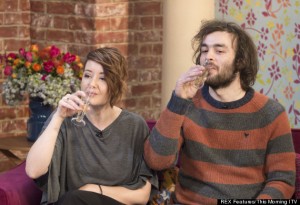 Have you been flushing away liquid gold down the toilet?

In the eyes of Bex Long and John Dixon, you have indeed, as this couple use their own urine to heal cuts on the hands, quell the symptoms of depression and aid clearer skin.

Appearing on ITV’s This Morning to tout the benefits of their special brew (and making an entire nation gag in the process as they proceeded to drink it on air), the couple have caused a backlash on Twitter against their practice, with people using the hashtag WeDrinkWee to voice their disgust.

John Dixon has been drinking it for seven years and when he met Bex Long, he introduced her to it, and it apparently helped treat her depression. She said: “I spoke to people where John works and heard stories about how they had got better [from doing it] and thought I would try it. ‘For the first couple of months I felt happy and bouncy – it worked straight away,’