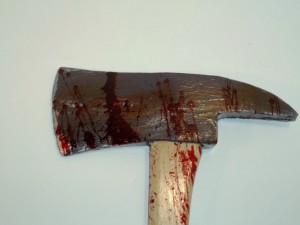 Police say a Phoenix father has confessed to killing his son with an ax.

Sgt. Steve Martos says 51-year-old Gary Sherrill was arrested on New Year’s Eve and booked on a charge of first-degree murder. It’s not clear whether Sherrill has an attorney.

Sherrill’s ex-wife called police after he failed to return their child. Sherrill picked up the 13-year-old boy a day earlier, but the mother had not been able to reach them.

KNXV reports Sherrill initially told police the boy wasn’t home. Officers asked more questions, and Sherrill let them in. Police found the boy dead. He had stab wounds and lacerations to several parts of his body.

Martos says Sherrill told police he believed his son was a demon and that his son was going to eat him.