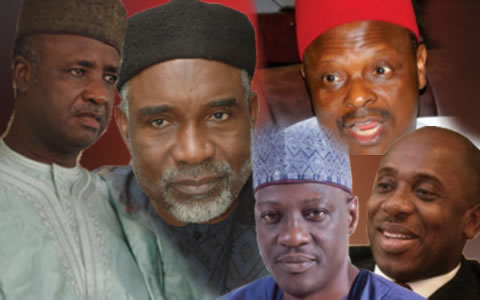 Contrary to the claim by five former governors of the Peoples Democratic Party (PDP), who defected to the All Progressives Congress (APC) that they are automatic leaders of the opposition party in their states, the leadership of APC has denied ceding the positions to them as part of the deal that saw them dump the ruling party for the opposition.

The clarification follows the rejection of the defected governors as leaders of APC in their various states by top leaders of the party, who championed its emergence from the defunct All Nigeria Peoples Party (ANPP), Action Congress of Nigeria (ACN), Congress for Progressive Change (CPC) and Democratic People’s Party.

Interim National Publicity Secretary of APC, Alhaji Lai Mohammed, who made this known weekend, said the party did not give the leadership mantle to any of the defected governors and urged APC chieftains in the affected states to take a cue from the national leaders of the party and sheathe their swords in the overall interest of the party.

“We have not asked the new PDP governors to take over the leadership of the party in their states. Nobody has said that. What we agreed on was that all the new PDP governors should be given the same privileges being enjoyed by the APC governors, which is just to be given the opportunity to appoint representatives for the interim committees of the party. Those who are claiming that do not get it right”, Mohammed said.

“The defection of the new PDP governors to the party should make us happy because they made us stronger in the states where they come from. Their coming has positive and negative sides: the positive is that we are stronger in their states while the negative side is that those who have been in charge of the party are feeling threatened with their ambition for one post or the other”.

He added: “There is a need to manage the ego and interest of those who are angry and feel threatened that their ambition might not being realised; but they should all forget about their ambition and work harmoniously with the former PDP governors. They should learn from our leaders who sacrificed their personal ambition for the merger to become a reality”.

The defection of Governors Rabi’u Kwankwaso of Kano State, Aliyu Wamakko of Sokoto, Murtala Nyako (Adamawa), Abdulfatah Ahmed (Kwara) and Rotimi Amaechi (Rivers) has caused disquiet among stakeholders in the states. The only is Rivers states where there is no discord among the members.

In Adamawa State, retired Brig-Gen. Buba Marwa and Markus Gundiri on one hand and Governor Nyako are fighting for the soul of the APC, while in Kano State Governor Kwankwaso is at loggerheads with his predecessor in office, Malam Ibrahim Shekarau.

The same goes for Sokoto where Governor Wamakko and former governor of the state Attahiru Bafarawa are into a supremacy contest while Gov. Ahmed and his predecessor, Senator Bukola Saraki on one hand are facing opposition from Mohammed Dele Belgore, who is APC leader in Kwara.

At the heart of the dispute is the condition given to the defected governors that they would enjoy the same privileges and rights given to APC governors in their states.

This was mistaken by the defected governors to mean that they are the leaders of the party in their respective states, but this has been rejected by the founding fathers of the APC in the affected states, who have described them as “strangers in the APC fold”.