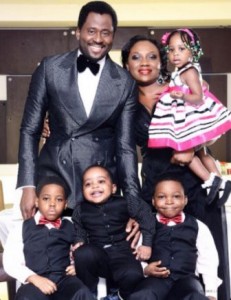 The actor’s wife and four kids have permanently relocated to the United States so the kids could have a better education.

Even though they left few months before now, people thought they went for vacation, but a source in the know has confirmed, they won’t be returning any time soon.

However another source has this to say about their relocation; ‘As per the call of nature between husband and wife, Desmond, has resolved not to go about sowing wild oaths all over town. “You know Desmond got married as a virgin, he will be holding on until he goes to see his wife or the woman comes to visit.

He is not randy at all’, the source said