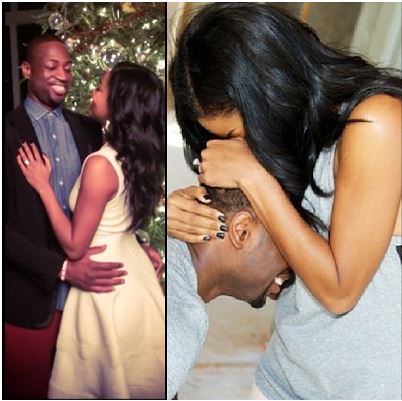 Yesterday news broke that Miami Heat point guard Dwayne Wade got a well-known Miami groupie pregnant while he and fiancee Gabrielle Union were on a ‘break’ early this year. The reports are true. The basketball player says he has nothing to hide and admits his new son was conceived during the few weeks he and girlfriend of 4 years actress Gabrielle Union were on a break. He said his son was born in late November.

Dwayne yesterday addressed the report during a press conference before the Heat game where he was asked about his new baby. He said:

“I’m in the public eye, so obviously that’s a part of it. But, it’s kind of … as I’ve always done my whole life, is always focus on what’s most important to me and my family, and that’s being a great father. I’ve always tried to show my importance in my kids’ lives and it doesn’t change now. But, yeah, I had a time, in our pain and our hurt, (but) a blessing came out of it in my life, having a son that was born healthy. So, I’m moving on.”

He said he and Gabby worked through the issue privately as a couple and that she was aware of the child before their engagement in December. Dwayne also has two sons with his ex-wife.

Hmmmm.. this doesn’t sound right to me. They were on a short ‘break’ and he went and got another woman pregnant? How many of you females would have accepted his ring? Would you stay with a man who had a child with another woman during your relationship? Let’s discuss this…