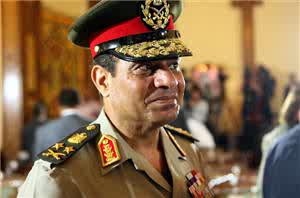 After successfully taking power from deposed Egyptian President Mohamed Morsi, in a military coup last July, Egypt’s army chief has indicated that he may run for president in elections slated for later this year, according to state media.

General Abdel Fattah el-Sisi, who led the coup to depose the country’s first democratically-elected leader, said on Saturday that he would run for the top post if the Egyptian people and army want him to.

“If I run then it must be at the request of the people and with a mandate from my army… We work in a democracy,” Sisi said during an army seminar in Cairo.

Egyptian military officers told AFP news agency that Sisi had support within the army to stand in the election.

Sisi’s comments come only days ahead of a referendum on a new Egyptian constitution scheduled for January 14-15.

The referendum will lead the way for parliamentary and presidential elections, as mandated by a political roadmap set up by the country’s military-led interim government.

The referendum marks the first time Egyptians will vote since Morsi’s removal and is largely seen to be as much a public vote of confidence in Sisi as in the charter itself.

Egyptian state news agency, MENA, quoted Sisi on Saturday urging Egyptians to “assume national responsibility and turn out in force to vote in the constitutional referendum in order to correct the democratic path and build a modern democratic state”.

The military general is a polarising figure in Egypt, supported by people who called for Morsi’s removal in mass protests last July, and hated by those who backed the deposed former president.

Morsi’s supporters have held frequent protests calling for his reinstatement.

They have however been met by a widespread crackdown from security forces, and thousands have been arrested.

Sisi’s candidacy for president could further deepen the divisions between many Egyptians.