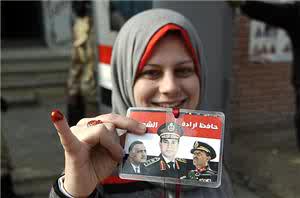 Egyptians queued for the second day in front of polling booths to decide on the country’s new referendum, as polarisation plays out on the streets between celebrating charter supporters and protesting opponents.

About 53 million Egyptians are eligible to vote for the new constitution, the result of which could see the defence minister, General Abdel Fattah el-Sisi, launch a presidential bid.

Anti-coup protesters, who blame Sisi for the removal of Mohamed Morsi from the presidency in July, rallied in the capital Cairo, Al-Sharqiyah in the north of Egypt and Fayoum and Delga, in the south.

The possibility of bloodshed is high, after at least 11 protesters were killed on Tuesday and 28 others were wounded when security forces intercepted rallies across the country, according to the health ministry.

Meanwhile, local television channels showed footage on Tuesday of jubilant groups of voters dancing and celebrating as they carried posters of Sisi.

“Any sense of stability is an illusion. That’s what people think General Sisi might offer,” said Shadi Hamid, the research director at Brookings Doha Centre. “But if we look at the last six months, Egypt has seen one of the worst spills of violence in its modern history.”

Tuesday’s events, of violence and celebration at polling stations, outline the polarisation that has gripped the country for years, a situation exacerbated since Morsi’s removal.

The army-placed government, determined to stifle any interruption of the vote, deployed about 200,000 security forces and about 160,000 army personnel to watch over the polling stations.

In Cairo’s upscale eastern district of Heliopolis, patriotic songs about the military blared from loudspeakers mounted on pickup trucks.

“This constitution is a nail in the coffin of the Muslim Brotherhood,” said Badiea Mansour, a 65-year-old former tourism employee.

Newspapers, most of which are pro-military, claimed a “heavy” turnout on Tuesday was a defeat for Morsi and the Brotherhood.

“The elephant smashed the ant,” read a headline in the daily el-Watan.

“Millions defy terror of the (Brotherhood) organisation in referendum lines.”

Those who campaigned against the draft have been arrested and now face criminal charges. Monitors suspected of Brotherhood ties were not given permission to oversee the vote.

A total of 294, mostly Brotherhood supporters were arrested over attempts to “obstruct the vote on the constitution and clashing with security forces and residents”, a high ranking interior ministry official said.

The Brotherhood, which the interim government has branded as a terrorist organisation, has called for a boycott of the vote. In its most recent statement late on Tuesday, it accused Egypt’s mostly pro-military media of falsifying reports on the turnout.

“They are trying to cover-up their early defeat,” said the statement from the Brotherhood-led Anti-Coup and Pro-Democracy Alliance, claiming the turnout was a mere 15 percent in southern Egypt and vowing to continue Brotherhood rallies.

The charter is almost certain to be approved: every referendum in Egypt’s modern history has been passed by a comfortable margin and not a single influential political group is pushing a “no” vote. [AlJazeera]