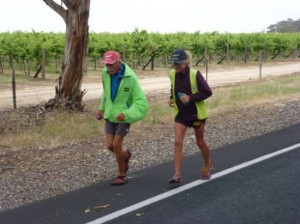 Most people forget their New Year resolutions within a few weeks, some can’t even make it a day. But a Melbourne couple in their 60s have completed what they set out to do, every day of last year. For the whole of 2013, Janette Murray-Wakelin, 64, and Alan Murray, 68, ran marathons every single day across Australia. They completed their 366th marathon on January 1, running 44 kilometers down the Yarra Trail to their home at Warrandyte. The couple ran a total of 15,000 kilometers last year.

The Murrays wanted to set a positive example of being responsible for one’s own health. “We wanted to share as much, with as many people, for as long as we could, a really positive message of hope and just to show people anything is possible if you put your mind to it and set a goal to achieve,” said Janette.

Janette and Alan followed a strictly vegan diet for the whole year, to help them achieve their goal. At 4 a.m., they would eat 10 bananas, a grapefruit and a date smoothie, before hitting the road. At 8 a.m. they had 10 more bananas, and a green smoothie at 9 a.m. Once they hit 31 kilometers, they would stop to snack on a fruit salad. At the 37-kilometer mark they would have three oranges. They would finish running by 4 p.m. and settle down to a scrumptious dinner of an avocado, vegetable juice and salad.

As easy as it sounds, the couple did have their fair share of challenges. The biggest challenge was the weather. “Mainly it was plain sailing, but we had a few very, very hot days and some serious bushfires that we managed to avoid,” said Alan. They also came close to running through a cyclone and getting caught in a hailstorm, as they traveled the country.

Kaje Aragona-Murray, the couple’s son, said his parents were “not the sort of people that sit there on the couch and relax for too long.” “It’s amazing what they’ve done,” he said. “They set a goal and went for it.” Ever since they got back, the Murrays have been doing interviews and spending time with their grandchildren.

Janette did say that it felt luxurious to sleep in her own bed after living in a caravan and running for six hours a day all through 2013. But they didn’t really spend much time relaxing or sleeping-in. On January 2, the couple went for another “little” run of 8 kilometers because they thought it wouldn’t be good for their bodies to suddenly stop.

After they are done meeting with family, the Murrays will be busy with supporters, sponsors, charities (that they raised funds for), writing a book and producing a documentary. Later this year, they are scheduled to tour the country to talk about the benefits of a raw vegan diet.

Kaje does worry a bit about his parents burning themselves out. But he has never worried about their fitness. “It’s not an out-of-the-blue thing,” he said. “They didn’t wake up on January 1 last year and say, ‘We’re going to run around Australia.’ They know what they’re doing, so you just have to let them go and do it.”

The Murrays said that their achievement would not have been possible without the help of a team of volunteers. “They all helped us,” said Alan. “They gave up their valuable time to come with us, to drive our vehicles, to be our nannies, push us out the door in the morning and just generally take care of us.”