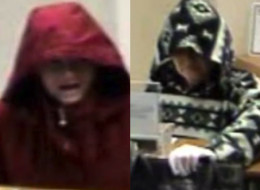 Except in Kingwood, Texas, where a female bank robber has allegedly held up the Woodforest National Bank inside the Walmart twice this month.

During the first robbery on Jan. 6, she wore a red hooded jacket and demanded cash while handing the teller a blue vinyl bag with a zipper, KBTX reported.

The second robbery was Jan. 21 and the alleged crook wore a white and black fleece Aztec printed hooded jacket and white gloves.

It’s possible different women committed the crimes, but KHOU-TV noted that the suspect in the second robbery greeted bank employees with a hearty, “I’m back!”.

No weapon was brandished during either robbery, the Houston Chronicle reported.

Investigators are looking for a white woman, between 40 and 45 years old, about 5′ 5,” and 130 pounds with dirty blonde hair, the Associated Press reported.