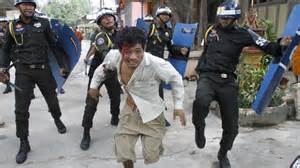 About 200 military police armed with assault rifles clashed with the protesters, who used sticks and petrol bombs against officers in an industrial district of the capital.

More than 20 others were injured in the violence, the Cambodian Human Rights and Development Association reported, adding that the police action was “an indiscriminate and disproportionate use of force”.

The fighting came a day after about 15 workers and activists were arrested and several people injured in a crackdown on strikes that have been going on for a week.
Unions and workers have been pushing for a doubling of the minimum wage, currently set at $US80 (N12,697.60) per month.

The government this week offered a $US20 raise starting in February.

Garments are Cambodia’s biggest export market and about 500,000 people are employed in the sector, which was worth about $US5 billion last year. 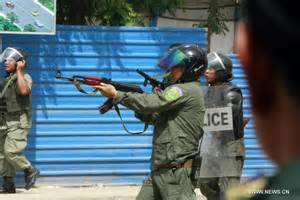 The government defended the use of force against the demonstrators on Friday, with Phay Siphan, spokesman for the Council of Ministers, accusing the country’s main opposition party of encouraging garment workers to riot.

Though not officially linked, the Cambodia National Rescue Party (CNRP) has come out in support of the strikers, and one of the main planks of their electoral platform last year was an increased minimum wage.

“They (the CNRP) manipulate the situation,” Siphan said.

“It’s nothing to do with a salary increase. They’re looking for bloodshed.”

Siphan said police had the right to defend themselves in the face of stone-throwing protesters, and denied use of assault rifles by police was a disproportionate use of force.