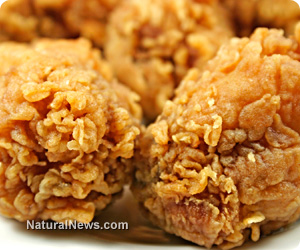 Even the most health-conscious person may find it difficult to deny that fried foods are delicious. The aroma they emit and the feeling they provide with every bite can be quite irresistible. But fried foods come with their share of adverse health effects.

Research carried out at the Fred Hutchinson Cancer Research Center and published online in The Prostate in 2013 revealed that regular consumption of deep-fried foods, such as doughnuts, fried chicken, fried fish and French fries, could elevate the risk of prostate cancer.

This link could be due to the formation of carcinogenic compounds in foods that are cooked at very high temperatures. Foods cooked at high temperatures, in particular deep-fried ones, also contain large amounts of compounds which are linked to oxidative stress and chronic inflammation. These conditions, too, increase cancer risk. For example, a chicken breast which is deep-fried for a third of an hour could have almost 10 times the amount of these chemicals compared to one boiled for one hour.

In contrast, women who often consumed baked or broiled fish had a lower risk of heart failure. So while the omega-3 fatty acids found in fish are known to improve cardiovascular health, deep-frying the fish not only seemed to negate these benefits but even ended up creating compounds which were harmful to the heart.

Research carried out by Spanish and Portuguese researchers and published in Food and Chemical Toxicology in 2013 found that fried fish sticks contained more furanic compounds than those that were oven-baked. While furans could improve the smell and taste of foods, there is research suggesting that they are harmful to health, and even carcinogenic.

Generally, higher temperatures produced more furans, while longer frying times also generated more furans. On the other hand, the more time that passed after frying, the lower the amount of furans that remained.

Therefore, some ways to reduce the amount of furans ingested include using the oven instead of a deep-fryer, cooking at lower temperatures, shortening the cooking time and leaving about 10 minutes between cooking and consumption.

4. Frying produces trans fats, which are detrimental to health

In addition, research has shown that frying foods raises the levels of trans fat in them, and trans fat has been linked to a wide array of illnesses.

This type of fat increases the risk of atherosclerosis (hardening of the arteries), plaque formation, inflammation in the body, insulin resistance, diabetes, autoimmune disease, Alzheimer’s disease and even cancer. Inflammation and insulin resistance themselves are linked to higher risks of many other health conditions, including cancer.

Moreover, deep-frying is usually carried out with vegetable oils which come with their own share of adverse health effects, while many fried foods are largely empty calories devoid of quality nutrition; in fact, some of these processed foods contain MSG and preservatives, which are themselves harmful to health.

Fried foods, without much doubt, smell wonderful and taste great. But the harm that they do on health is significant – they harm the heart, cause inflammation and increase the risk of cancer and diabetes, among many other adverse effects. These cannot be ignored by anyone who wants to nurture a strong, healthy body and avoid numerous serious chronic diseases.