Home Politics Gbajabiamila To Jonathan: ‘You Don’t Have The Powers To Remove Sanusi From...
Facebook
Twitter
WhatsApp 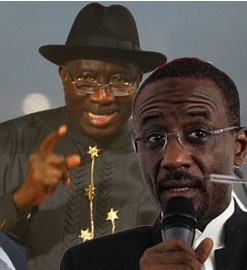 As the purported rift between President Goodluck Jonathan and Governor of the Central Bank of Nigeria, CBN, Malam Sanusi Lamido Sanusi generates mixed reaction in the polity, the National Assembly, according to Rep. Femi Gbajabiamila will not aid the president’s request to sack the governor from office.

Gbajabiamila, who is the House of Representatives Minority Leader, was speaking on the backdrop of recent media reports that the president had directed Sanusi to turn in his resignation letter following the perceived embarrassment caused to his administration by a memo the CBN governor wrote but which later leaked to the press, raising the alarm over alleged unremitted oil revenue funds by the Nigerian National Petroleum Corporation, NNPC, to the tune of $49.8 billion (about N8 trillion). Sanusi has since revised the amount down to $10.8 billion.

However, the lawmaker advised the president to first of all sack the Minister of Aviation, Princess Stella Oduah before calling for Sanusi’s resignation.

Expressing surprise at the concerns generated by Jonathan’s demand, Gbajabiamila recalled that the National Assembly was scorned when it was fighting for CBN’s autonomy.

In a statement yesterday by his Research Assistant, Wasiu Olanrewaju-Smart, the lawyer-turned lawmaker admitted that the president had the rights to demand for Sanusi’s sack but reminded him that the power to remove the CBN governor was vested only in the National Assembly.

It reads: “In the light of the wide speculation about the telephone conversation between the President and Sanusi Lamido Sanusi, urging the (BCN) governor to resign before his resignation in June, 2014, House Minority Leader Femi Gbajabiamila said the President has the right to make such demand but does not possess the power.

“Many have asked Mr President to resign but they lack the powers to compel him.

“If those advising the President cannot think, at least they can read. The laws of the land are written in English and in black and white.

“By asking that the President seek the approval of two-thirds of the Senate, the law essentially seeks to enforce the doctrine of checks and balances and avoid the abuse of powers of a capricious and arbitrary President while also guaranteeing the autonomy of the CBN”.

The lawmaker noted that the apex bank deserved its autonomy.

He also decried the President’s derogatory treatment of an earlier request by Nigerians and the National Assembly when they urged him to purge his cabinet of corrupt officials.