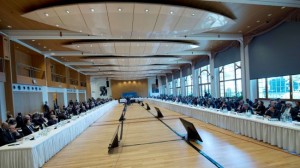 The key issue of a transitional government in Syria is due to be discussed during the Geneva 2 peace talks which have so far focused on humanitarian issues.

It was hoped that talks between the government and the opposition on Monday, mediated by UN-Arab League special envoy Lakhdar Brahimi, would move on to the central issues that divide the two sides after nearly three years of civil war – Syria’s political future and that of President Bashar al-Assad.

The opposition says Assad must leave power and a transitional government be formed based on an agreement reached during a first peace conference in Geneva in 2012.

The government says Assad’s role is not up for debate at this conference – dubbed Geneva 2 – and denies that the initial Geneva deal requires him to go.

The regime has emphasised that the question of rule would have to be put to the Syrian people at the end of Assad’s constitutional term and cannot be enforced by external parties.

Speaking to Al Jazeera’s James Bays in Geneva, presidential adviser Bouthaina Shaaban said that only Syrians knew what was best for Syria.

“Let Syrians decide what is best for Syria,” she said. “This war is not about President Assad, it is about Syria.

“They [the Geneva 2 conference] have tried to give themselves credibility by talking about humanitarian aid, but that has nothing to do with them. Let us stop the fighting, put a stop to terrorism and let us start a political process in Syria.”

In the first tangible promise to emerge from the talks, Brahimi said on Sunday that the government had agreed to allow women and children safe passage from besieged rebel-held areas of the city of Homs.

But Syrian Information Minister Omran al-Zoubi told Al Jazeera nobody should think that the humanitarian deal in Homs was the result of the Geneva talks and that it was a process planned earlier between the government and the UN and Red Crescent on the ground.