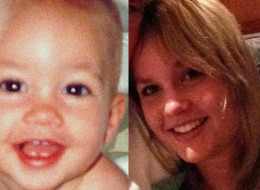 A 20-year-old woman who was kidnapped by her mother when she was 10 months old spent her entire life on the run — but she forgives her captor.

In an interview with Australian tabloid news program Today Tonight on Tuesday, Savanna Todd, who lived her life as Samantha Geldenhuys, said she isn’t confused about who she is, and that she is “not a victim.”

The FBI and Australian federal police arrested Todd’s mother, Dorothy Lee Barnett, on Nov. 4, 2013. At the time, officials said that Todd was living a “safe, healthy and otherwise normal life” in Queensland, Australia.

The bust was the culmination of a nearly 20-year search for Todd, who went missing in South Carolina in 1994.

A South Carolina court handed custody of Todd over to her father, Harris Todd III, after determining that Barnett had bipolar disorder. But rather than give her child up, Barnett fled the U.S. and spent the next two decades living under several aliases in South Africa, New Zealand, and finally, Australia.

When investigators searched Barnett’s Isle of Palms, S.C., home after she fled, they found crawlspaces in closets and maps with cities and escape routes highlighted.

According to the Daily Mail, Barnett is “thought to have fled the United States using a fake passport with the help of a secretive organization called Children of the Underground, who help women stuck in abusive relationships.”

Barnett was charged with international parental kidnapping and two counts of false statements in a passport application. She is currently in Australian jail pending possible extradition to the U.S., where she could face more than 20 years in prison, according to the Brisbane Times.

But Todd, who appeared at her mother’s court appearance in November holding a sign that said, “We love you, Mom,” has been unfailing in her support for her mother.

“A name does not change who you are,” she said. “Savanna can be a remembrance of what happened 20 years ago but Samantha is who I am and who I will be.”