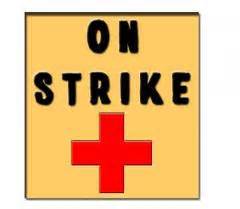 The Joint Health Sector Unions, in league with the Assembly of Health Sector Professionals, yesterday, directed its members to proceed on a 5-day warning strike from Wednesday January 15, to Tuesday January 21, 2014, except government addresses their grievances through constructive dialogue.

In a jointly signed position paper presented on contemporary developments in the health sector, the workers, comprising pharmacists, nurses, physiotherapists, radiographers and laboratory scientists among others, insisted that the dialogue with the President is the minimum and non-negotiable conditionality, as the President, who they described as “the father of the nation”, must be willing to give all his children a listening ear.

Spokesperson of the group, President of the Pharmaceutical Society of Nigeria, PSN, Pharm Olumide Akintayo, warned: “In the event that government does not enter into meaningful dialogue  within two weeks of this notice, we shall be left with no option than to commence a more excruciating and total nationwide strike to enforce our liberties.

He noted that the declaration was a follow-up to the expiration of the 15-day ultimatum earlier given, stating; “We call on all men and women of goodwill to admonish government on the need to urgently redress this avoidable crisis it has also assisted to worsen.”