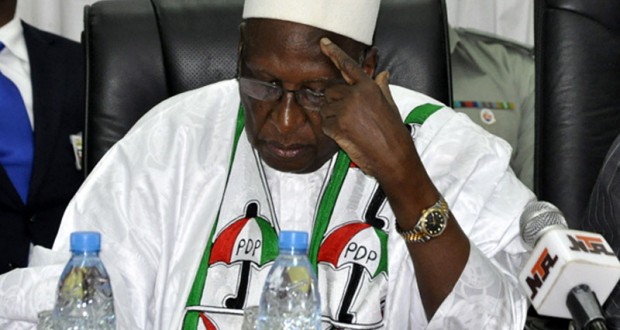 Immediate past National Chairman of Peoples Democratic Party (PDP), Alhaji Bamanga Tukur has advised whoever succeeds him to be fearless, consistent and focused.

Reflecting on his 21-month tenure as chairman which came to a premature end last week, Tukur admitted he went through hell in office, saying that but for the wisdom and doggedness of President Goodluck Jonathan, the party would have been history long before now.

In a statement he issued yesterday, Tukur, who had gone underground since his forced resignation, warned the incoming chair to be wary of “evil plots” by certain members whose mission is to completely destroy the party.

Tukur also admitted that his resignation from office was a huge sacrifice.

He regretted that certain members would prefer the party being run in the “business as usual” mentality. Such members, he said, were utterly opposed to any form of reforms.

Restating his loyalty to President Jonathan, Tukur said he would continue to support the President and the PDP to the best of his ability.

He insisted that he stood by every decision he took while in office, saying such decisions were meant to reform the party and to deepen internal democracy.

He implored Nigerians to continue to pray for the president and the ruling PDP to overcome its trying moments.

According to the former governor of old Gongola State, some key stakeholders in the PDP never had its interest at heart.

Tukur said: “Personal ambitions, crave for sudden wealth and unimaginable level of treachery usually got the full attention of such stakeholders than anything else.

“I did my best to bring PDP to good standard and international best practices in politics. I came in with the mind-set to reform the party by promoting the principle of election instead of selection and the idea of consensus instead of imposition.

“Alas, I was proved wrong by those who believed that the old order in PDP must be retained, not for any good thing, but for their selfish interests.

“Some members got so desperate that they turned to the media and funded all negative reports against me. If you are familiar with all the negative media reports, none attributed any wrongdoing to me. The reports only echoed the views of the sponsors that I was unbending in my desire to change the bad situation in PDP.

“They even attempted to use the media to get me in confrontation with Mr President. I never spoke to anyone about issues, yet the media would attribute some reports to me. But we knew those who were behind it all. They had forgotten that whatever goes round surely must come round.

“To put me on the spot, they sponsored another report that governorship aspirants were buying me bulletproof jeeps so that I can give them governorship slot in their states.

“I understood that the authors of such reports had denied what they wrote. It is wickedness when the media distort facts against you, just to please their pay masters.

“How could I do such a thing when indeed, I was the one advocating change in PDP? I waged war against the idea of imposition or selection of candidates for elections in our party.

“We did that successfully in Adamawa and it is working. We conducted transparent elections in Anambra and the best candidate won. We never favoured any candidate during the process.

“All the same, those who benefited from the rot within the party in the past stood on our way. My conviction is that very soon, Nigerians will know the truth. It then matters what the country does with such truth”, Tukur said.