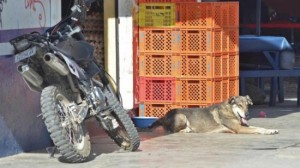 Huachito is an extremely faithful Bolivian dog, named after his famous Japanese counterpart, Hachiko. Just like Hachiko, who stunned the world with his loyalty to his dead owner, Huachito is mourning the death of his beloved human friend.

Huachito, ‘Huachi’, or simply ‘Hachi’ to some, is of an unknown breed. This remarkable dog has surprised the residents of Pope Paul Avenue, in Cochabamba, Bolivia, where he comes daily and waits for his master to return. Unfortunately, the dog’s owner passed away five years ago in a tragic accident.

According to Roman Lujan Bilbao, a local butcher, “It should be about five years since the owner died in a motorcycle accident. The dog has come and stood here ever since.” The locals have taken to feeding and caring for the dog while it waits patiently.

The story goes that in happier times, ‘Huachito’ would follow a young man riding a bike around the Avenue every day. The bike was hit by a taxi one morning, and its rider died on the way to the hospital. Ever since, Huachito has been roaming the streets, expecting to find his friend again.

Sometimes, he is unable to contain his disappointment and lets out miserable howls. Every time a bike passes by, he barks frantically, thinking that it might be his master. “He walks from corner to corner and comes back to where his owner died. He stands at that corner and howls,” said Elizabeth Martha Garcia, a local saleswoman.

Unknown to Huachito, he has been making new friends on the Avenue. The locals have grown extremely fond of him – kids play with him, neighbors feed him, and some families even want to adopt him. But that just doesn’t seem possible while Huachito remains loyal to his original master.

Dogs are such wonderful creatures; their loyalty is so beautiful and amazing. Here at OC, we’ve featured whose loyalty to their masters stretches beyond the border between life and death. There was Wang Cai – the Chinese dog that waited outside his dead master’s workplace for four years, Ciccio, who attended daily Mass at the church his master used to go to and Leao and Capitan, who refused to leave their respective owners’ gravesides for years.